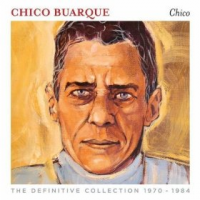 Still going strong at 67, Brazilian singer and composer Chico Buarque maintains a release schedule of around an album a year, as well as writing books and scripts for film and stage. In Brazil, Buarque has been a star since the early 1970s, when he was a leading figure in the emerging musica popular brasileira (aka MPB) movement and a courageous critic of the military dictatorship which ruled the country from 1964-85. He is not a "jazz" artist, but he is a singer/songwriter of rare depth and intelligence, and as such his work appeals beyond the strict confines of style.

Wrasse's highly recommended, two-disc collection is drawn from Buarque's time with the Philips label, with which he recorded from 1970-84, the most daring period in his career. He had released his first album in 1966, in a relatively anodyne Brazilian pop style which he followed until near the end of the decade; he was criticized for his political and aesthetic caution by fellow artists Caetano Veloso and Gilberto Gil, leaders of the MPB-related tropicalista movement. But by the end of the 1960s, Buarque's lyrics became more politically conscious and he spent a short time in jail. After a year of self-imposed exile in Italy, Buarque returned to Brazil, signed to Philips and began releasing records which operated on two levels: as music and as politics. In 1985, when the military dictatorship finally gave way to democracy, he moved from Philips to RCA.

Thus, the 40-track Chico: The Definitive Collection 1970—1984 includes many of Buarque's most important, and enduring, songs—some of them written in collaboration with his former critics Veloso and Gil, along with Antonio Carlos Jobim, Milton Nascimento and Vincius de Moraes.

Buarque's 1971 LP, Construcao, announced his new direction, and it is widely and rightly regarded as one of the all-time greatest albums to come out of Brazil. Disc one of this collection includes five tracks from Construcao: "Valsinha," "Desalento," "Minha Historia," "Cotidiano" and the title track. In the main, Buarque worked during the 1970s with medium-sized lineups—acoustic guitars, bass and percussion augmented by string sections, back-up singers and flutes—but on "Constucao" he went symphonic. The song, an expression of solidarity with Brazil's oppressed and exploited working class, is scored as if for a contemporaneous Hollywood crime movie, racking up the tension with key changes and screaming brass. Other tracks, such as the samba/waltz, "Valsinha," are arranged on a less epic scale.

Of necessity, Buarque had to employ coded rather than explicit lyrics in his junta-era songwriting; to do otherwise would result in, at best, jailing, at worst, assassination. Disc one's "Calice," from 1978, written with Gilberto Gil and performed as a duet with Milton Nascimento, is a fine example. The line "I want to sniff diesel fumes" refers to the assassination of Stuart Angel, whose mouth was strapped round a car's exhaust pipe during torture. In "Calice," Buarque criticizes the absence of freedom of expression under Brazil's military rulers. Disc two's "Apesar De Voce," also from 1978, deals with the same issue and became an anthem of Brazil's protest movement.

Other tracks included on this collection are less disturbing; during the military dictatorship, Buarque continued to write and record delightful samba and bossa nova-based songs whose lyrics dealt with popular music's abiding interest in love, lost and found. Disc two's dreamy "Eu Ti Amo," from 1980, written with Antonio Carlos Jobim and sung as a duet with the angel-voiced Telma Costa, is one of these. Gorgeously melodic, rhythmically uplifting music for dancing to or socializing with.

Chico: The Definitive Collection 1970—1984 presents a rounded picture of one of the 20th century's most compelling artists.