By JOHN KELMAN
September 2, 2014
Sign in to view read count 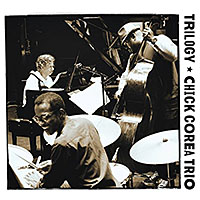 Remember when CDs were so expensive to make that record companies would release double albums and remove a track or two, just so that it could fit on a single CD? Well, there may be many negatives about the state of the music industry today---despite this being a time when so much music is being made that, like the glory days in the 1960s/70s, it seems like anything is possible...there's just no more industry support to help any of it reach the same number of people—but one good thing is that the price of manufacturing a CD has dropped so much that artists like the SFJAZZ Collective can regularly release double or triple CD collections of the music toured each year, when the group pays tribute to a different artist by having each member contribute an arrangement of a favourite song by the honoree, as well as another original composition in his/her spirit, like its loving 2013 homage to pianist Chick Corea, Live SFJAZZ Center 2013—The Music Of Chick Corea & New Compositions (SFJAZZ, 2013).

Well, it turns out that Corea has his own multi-disc live set on offer this year: Trilogy, a whopping three-disc, nearly three-and-a-half hour collection of music culled from various dates in his extensive world tour with bassist Christian McBride and drummer Brian Blade. Corea's trio combines original material old and new, with a healthy dose of jazz standards, songs from the Great American Songbook...even one classical piece, liberally reinterpreted by this masterful, virtuosic and eminently swinging group.

When the trio made a 2010 stop in Ottawa, Canada as part of the TD Ottawa Jazz Festival's off-season program, there'd been no prior announcements about what the trio would be doing. With McBride and Blade first teaming up together in Corea's fusion-heavy Five Peace Band collaboration with guitarist John McLaughlin, including a 2009 Montreal performance that virtually lifted the roof off Place des Arts' Salle Wilfred-Pelletier—and with the pianist last playing Ottawa in 2006 with longtime friends and musical collaborators Eddie Gomez and Airto Moreira in a trio that augmented Corea's grand piano with plenty of Fender Rhodes and synth—there was every reason to expect that his trio with McBride and Blade might be configured along similar lines.

How wrong everyone was. Instead, it was an all-acoustic affair that, by the end of 90 minutes of breathtaking interaction and, in particular from the puckish Corea, plenty of mischievous musical fun, many in the nearly sold-out Dominion Chalmers Church crowd were wondering it there'd ever be a release from this exceptional trio. Well, it's been a long,

CD1: You're My Everything; Recorda Me; The Song is You; Work; My Foolish Heart; Fingerprints; Spain. CD2: This is Now; Alice in Wonderland; It Could Happen to You; Blue Monk; Armando's Rhumba; Op. 11, no. 9; How Deep is the Ocean?. CD3: Homage; Piano Sonata: The Moon; Someday My Prince Will Come.