By JOHN KELMAN
September 21, 2011
Sign in to view read count 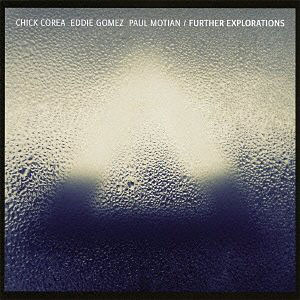 Three still-living jazz icons team up on Further Explorations, an album inspired by another legend whose influence remains unequivocal, 30 years after passing away, age 51, in 1980. Gaining initial exposure as a member of Bill Evans' first trio on New Jazz Conceptions (Riverside, 1956), drummer Paul Motian left the group nearly four years before bassist Eddie Gomez would commence an eleven-year run with the pianist on At the Montreux Jazz Festival (Verve, 1968).Though the connection is less direct, Evans was an early influence on perennial student Chick Corea, in particular on early recordings like the younger pianist's now-classic Now He Sings, Now He Sobs (Solid State, 1968); the two also sharing a common interest in classical music and bosses—trumpeter Miles Davis and saxophonist Stan Getz—albeit years apart.

With Corea, Gomez and Motian far too advanced as distinctive voices and personal stylists to do anything quite so overt as a tribute record, Further Explorations is better-described as a tabula rasa, built on a repertoire largely associated with Evans, along with a few well-chosen originals. That he actually presented the lead sheet for his gently balladic "Bill Evans" to Evans, at the Top of the Gate in the 1970s, only speaks to Corea's endless appreciation of a pianist who was, in fact, gracious enough to let him sit in with his trio around that time.

Historical tidbits aside, Further Explorations lives up to its title by taking Evans' repertoire to realms unattainable by the sadly departed pianist. It reflects Motian's equally influential evolution, his sense of time so fluid yet, when necessary, so absolutely unshakable that rather than anchoring a piano trio he liberates it. On his own often-recorded "Mode VI," he provides the requisite color and periodic temporal suggestions, freeing the often-percussive Corea to play with an uncharacteristically muted touch, and giving Gomez the opportunity to provide some of the set's most hauntingly beautiful moments, his sinewy yet plaint pizzicato balanced with a breathtakingly delicate arco.

The captured patter before Evans' set-opening "Peri's Scope," on this live set, suggests these players choose what to play with the same spontaneity as how to play; light on arrangements, just effortless envelope-pushing, as Motian swings with uncharacteristic fire and Gomez walks energetically through Corea's solo, before breaking down into a series of trade-offs where everyone somehow manages to remain with their feet in the pool.

Evans covered Thelonious Monk during his lifetime, but never with the kind of freedom—or, perhaps, with a different kind of freedom—and mischievous idiosyncrasy with which this trio imbues "Little Rootie Tootie," nor did he travel such abstract roads as Corea's "Rhapsody," which trades on both the longstanding relationship shared by the composer and Gomez, dating back to The Leprechaun (Polydor, 1976), and that special sound of surprise that can happen—and, in this case, did happen—with a first encounter, as the two-week run at New York's Blue Note, from which these two discs were culled, represented for Corea, Gomez and Motian.

Now 80, Motian seems busier than ever, while Corea, ten years his younger, appears hell-bent on covering even more stylistic territory than he did during his 1970s heyday, when he ran the gamut from the freewheeling Circle group of Paris Concert (ECM, 1971) and chamber jazz of Crystal Silence (ECM, 1973), to pedal-to-the-metal jazz-rock of Return to Forever's Romantic Warrior (Columbia, 1976) and gentle, Latin-esque musings of Friends (Polydor, 1978). Still, none of the pianist's projects, since the turn of the millennium, have combined the kind of effortlessness freedom and virtuosity—born of decades on the bandstand—with the unfettered energy and relentless joy of discovery normally associated with players far, far younger.

If anything, the superb Further Explorations suggests that the best years may still be ahead of Corea, Gomez and Motian, and the only thing that could possibly be wrong with this Japan-only release is if it fails—like the Five Trios (Universal Japan, 2007) box and Super Trio (Universal Japan, 2005) before it—to be issued to the rest of the world.