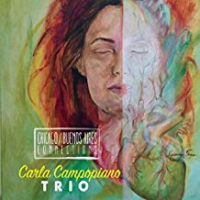 Just as jazz was born in the brothels of New Orleans, tango was first played in disreputable dives along the banks of the River Plate (Rio de Plata), which forms the natural border between Argentina and Uruguay. It was a heady mix of the German waltz, the Czech polka, the Polish mazurka, the Bohemian schottische, the Spanish-Cuban habanera, the African candombe and the Argentinian milonga.

Like jazz, as it developed, its direction of travel was northwards. Finally, under the direction of the great bandoneon player/composer Astor Piazzolla it developed into tango nuevo, incorporating elements from jazz to become much more than mere dance music. Carla Campopiano Trio, a flautist born and raised in Argentina, who now lives in Chicago, continues the refining process on this EP, influenced, she says by blues and jazz.

She collaborates with guitarist Angel Colacilli and Mexican percussionist/arranger Gustavo Cortinas to produce infectiously happy music. They are joined by Julián "El Piojo" López (guitar) on Piazzolla's "Zita," with Colacilli switching to bass. The closing number, "Triunfal (Triumphant)," was also composed by Piazolla. It greatly impressed French composer and conductor Nadia Boulanger when he played it for her at a time when he was contemplating abandoning tango for classical music and she persuaded him against such a move.

"Sacachispass" is by another highly influential tango composer, Julio De Caro, renowned too for his ability to play the Stroh violin, which had a cornet horn at one end, enabling it to project its sound above the rest of the orchestra. U.S. bandleader Paul Whiteman—a great gimmick merchant—persuaded him to take it up.

Campopiano's flute breathes fresh air into her version of Horacio Salgan's musical tribute to tango pianist Don Agustin Bardi while Julian Plaza's "Melancolico" was written in the mid-1950s as part of a series of pieces depicting different moods. He was influenced by Piazzolla but stayed closer to the music's bawdy roots.

In 2009, UNESCO approved a joint proposal by Argentina and Uruguay to include tango as an Intangible Cultural Heritage. As well it might!