By John Kelman
October 6, 2004
Sign in to view read count 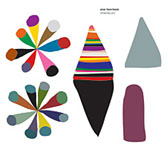 Every now and then an album comes along that, with its purity, lack of assumption, sheer power and subtle grace, sets a new standard both for the instrument and the possibilities of music. Norwegian trumpeter Arve Henrkisen, who has been establishing a broader reputation over the past few years on recordings by Scandinavian artists including bassist Anders Jormin, pianist Jon Balke and the Anglo-Norwegian conglomerate Food, did just that with his last release, Sakuteiki (Rune Grammofon, '01). Utilizing only trumpet, voice, harmonium and organ, Henriksen single-handedly redefined the potential of music as a healing source. Quietly elegant, otherworldly yet somehow completely organic, Sakuteiki demonstrated that it's possible to create a rich soundscape with a bare minimum of instrumentation and preconception.

Now, with Chiaroscuro , Henrkisen expands his vision to include percussionist Audun Kleive and Jan Bang, who in addition to triggering a variety of stored samples, does some real-time sampling of Henriksen to create a broader audioscape. Recorded live at a variety of locations, Henriksen, Bang and Kleive deliver ten spontaneous compositions that, if possible, are even more beautiful than those on Sakuteiki , creating an album that is deeply moving without being the least bit melodramatic, obvious or overstated.

What Henriksen does has some precedence in the work of Brian Eno and, in particular, trumpeter Jon Hassell, who shares a similar tendency to morphing the sound of his trumpet into something more closely resembling the sound of a shakuhachi flute. But Henrkisen's conception is starker than Hassell's and, while the music on this recording clearly relies on looping and sound shaping, it is less overtly considered than Eno's ambient recordings.

Meditative, almost Zen-like in its simplicity, Henriksen, Bang and Kleive's approach eschews all concept of ego, playing instead with a lucidity and economy that is more about conveying a purity of emotion than paying attention to the mechanics of performance. From the tenderness of "Opening Image" to the hypnotic ambience of "Chiaro," and from the icy cool of "Holography" and the brooding "Scuro" to "Parallel Action," which is the most rhythmically-driven composition of the set, the ensemble traverses a breadth of feeling within an overall focused and consistent vision. And as effective as Henriksen's unique trumpet tone is, his own falsetto voice may be even more expressive, fragile with a delicately potency.

Why this is such a moving record is somewhat difficult to articulate. It incorporates a larger world view that draws from a variety of musical sources, including music from Japan, Bali, Mongolia and, of course, Norway. But this is a case where the whole is absolutely greater than the sum of the parts, and Henriksen continues to create music that is instantly recognizable, not just because of the timbre of the instruments, but for its pure, emotive clarity. This is music that entirely bypasses the intellect and goes straight to the soul. If music is measured solely on its spiritual impact, then Chiaroscuro is clearly a strong contender for album of the year.