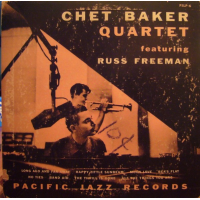 Iconic West Coast jazz by the legendary trumpeter at the cusp of his career. Baker made a slew of recordings in his lifetime, but this is among the crème de la crème.

Trumpeter Chet Baker rose to prominence in the mid-1950's and continued to perform and record prolifically until the late 1980's. But his best work came early in his career. Baker was a long-term heroin addict, and much of his later output, which can sound tired and repetitive, seems to reflect the toll the drugs took on his mind and body.

Baker's playing as a young man was nothing short of ethereal. His approach was spare, so you won't hear dizzying displays of rapid-fire notes, and he generally played the instrument in its middle range, so you won't hear piercing high C's. There's a light, laid-back aura to his playing that makes it seem effortless. But each note has a purpose, each chorus a musical story of its own. Baker was a wonderful improviser, able to turn a Gershwin or Rogers & Hart ballad into something even more beautiful than the original. But he could also generate pulse-pounding excitement on up-tempo numbers.

Trying to sample Baker's early work can be confusing, because the original recordings have been shuffled and re-issued so many times over the years. The result has been a bin full of "Best of" collections, many repeating some (but not all) of the songs on the others.

This disc will help us cut though the confusion. These are all tracks made in 1953, when Baker was 24 years old and on the cusp of his career. They also feature pianist/composer Russ Freeman, who contributed half a dozen tunes to the sessions.

Just to be sure you have the right disc, this is the one called Chet Baker Quartet featuring Russ Freeman, on the Pacific Jazz Records label. It has 25 tracks, beginning with "Isn't It Romantic" and ending with "Winter Wonderland."

You'll notice that the tracks on this disc run only three minutes or so. That's because record companies were still making 78 rpm records along with long-playing (LP) records in the early 1950's, and those old 78's couldn't accommodate more than three minutes. Still, Baker and company manage to pack a lot of music into such a short window.

You'll also notice that these are monaural recordings. (Stereo didn't become widely available for another decade.) But don't worry. Although the sound won't blow you out of the room, you'll find it crisp and clear.

If you haven't heard this Rogers & Hart tune before, first listen to Ella Fitzgerald's slow, straight-ahead rendition. In Baker's version, pay special attention to his solo from 2:00 to 2:58, a gorgeous piece of improvisation. Listen to it several times and notice how many new variations he spins on the melody, each one a new song in itself.

A Cole Porter standard. Again, if you haven't heard it before, listen to Ella Fitzgerald first. Baker takes the song at an up-tempo pace, starting to toy with the melody right from the first chorus. At 0:52 he takes off with some beautiful variations, and then at 1:35 a nice piano solo from Russ Freeman. Baker returns at 2:16 with another solo that builds in intensity until almost the end.

This is a Freeman composition, taken at a fast tempo. Baker's first improvisation runs from 0:38 to 1:11, followed by Freeman's piano solo. At 1:45 Baker returns. Listen carefully at this point for the tight, complex interplay between trumpet and piano. Freeman is no longer just playing complementary chords behind Baker. He's raised his game and is now weaving his own melody through Baker's—exciting to hear, and a nice challenge to the analytical part of your brain.

This Jerome Kern tune, written for a Broadway show in 1939, has become a standard for jazz musicians over the years. If you're not familiar with it, listen to Ella Fitzgerald first. Baker takes this one to the racetrack right from the start, with a fine solo from 0:37 to 1:10, and an even more dynamic one at 1:41. Notice how Baker's solos remain highly structured despite the white-hot tempo. Each has a beginning, a middle and an end, with every note helping to build a new melody.

Another Freeman tune, and another chance to hear Baker at a fast tempo. He begins to improvise in earnest from 0:35 to 1:06, and then at 1:38, after Freeman's piano solo, the two of them begin some complex counterpoint (as in "No Ties," above). Listen to how their two lines of melody dart in and out of one another, and try to follow the separate strands—hard, but fun.

Hang on to this one and play it again next Christmas, when you've had enough of Rudolph and those roasting chestnuts. Baker does some inventive solo work here. At one point he slips in the first six notes of "With a Song in My Heart." Why not?

Long Ago And Far Away; Happy Little Sunbeam; Moon Love; Bea'S Flat; No Ties; Band Aid; The Thrill Is Gone; All The Things You Are.