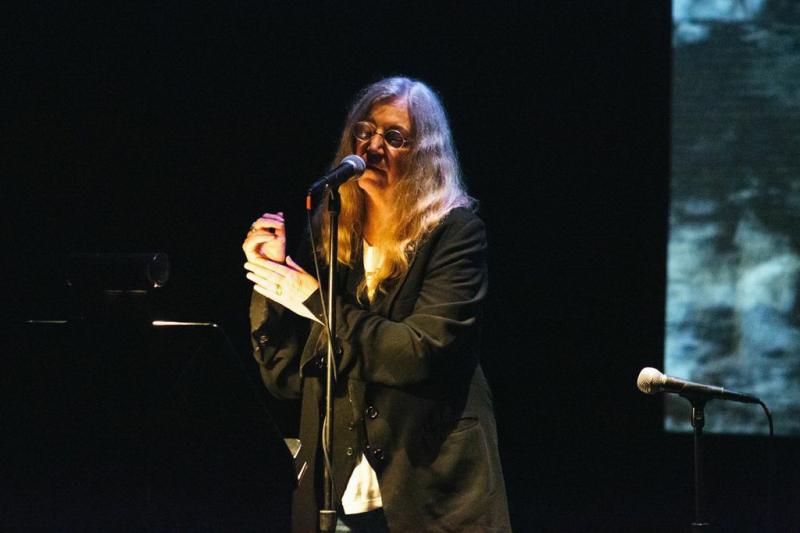 The California drummer Ches Smith has long been transplanted to New York City, so that now he's indelibly embedded in its streets, he's frequently playing in a vast variety of settings. Some of these were presented during his six-night residency at the Stone, John Zorn's deeply uncompromising Alphabet City corner-venue. We All Break is a curious name for a combo that revolves around the core art of Haitian vodou (voodoo) percussion. Sounds more like an alternative rock or electronic outfit. The roots of this Smith concept lie in his time at Mills College in San Francisco, and his studying with Daniel Brevil, who happened to make the coast-to-coast journey for this gig. With Smith at the drum kit, Brevil was joined by Markus Schwartz on a similar array of traditional Haitian percussion. The odd man out was Matt Mitchell, odd not only because he's a pianist, but also because we mostly know him as a habitual extreme-jazz abstraction practitioner, rather than a deep-ritual rhythmist. It was soon to become clear how deftly he could switch allegiances, and adapt his skills to an unfamiliar terrain. On paper, this looked like a very odd coupling, which was as good a reason as any to make a visit.

Smith mostly handled the foundation rhythms, concentrating on bass drum and detailed hi-hat or cymbal repetitions. He made several clattering rimshot statements, and sometimes leaned across to a traditional Afro-skin. It was the tightly-connected front line of Brevil and Schwartz who thrust themselves into the fray most aggressively, combining palm slaps and thick-stick blows, sometimes breaking out into fast chants. Mitchell appeared to be in need of great concentration to match his speed-riffing piano figures with these intricate patterns, but any strain was not evident in the sonic results. He was alert, but always on the mark, harvesting the tension in a positive fashion. There was a visible joy bouncing between the bandmates as they coalesced, perhaps surprising themselves with how knitted the compositions sounded. Rarely does so-called "art" music head out on such a successful exchange program with so-called "visceral" tradition. Eventually, even Mitchell took a drum part, closing out the set by contributing a repeated bass pulse.

This was a concept piece, presented as part of fi:af's Crossing The Line festival. It revolved around the late-period poetry of Nico, the German doom-songstress who made her name with The Velvet Underground. The ridiculously international Soundwalk Collective worked with Jesse Paris Smith, who added real-time percussion to their sonic spread of environmental electro-acoustic textures. Video artist Blake Carrington provided the largely monochromatic backdrop swirlings. The resultant Killer Road piece was dedicated to the crafting of a suitably atmospheric nest for Nico's ether-personality, and there could be few superior choices for key intoner than Jesse's mother, Patti Smith, a similarly charismatic figure, who was guaranteed to impose a sense of informal authority to the proceedings.

Indeed, the Patti presence was crucial to the evening. Even though the careful accumulation of field recordings, seeming keyboard drones (Nico's favored harmonium) and mostly nature-based projected imagery (apparently sequenced in an improvisatory fashion) wove together in a mood-sopping dark cloak of portentousness, it was Patti who contributed the verbal tension that clawed the audience into this peculiar world. She made a few well-timed digressions from the Nico lines, improvising her own comments, drawing attention to the present delivery-moment—a good way to relax the onlookers, before tightening the knot anew. At times, Patti would begin to adopt the cadence of a Southern gospel preacher, and then she slid towards an almost-sung delivery. It was at this point that we couldn't help having a triggered response to that completely unique singing voice, suddenly slung into rock'n'roll mode. For the final phase, Jesse moved over to a set of electro-pads, and then what looked and sounded like some kind of hanging chimes. Patti sat down, turning to face the screen, presumably to vocalize in sequence with the images, and to coordinate a conclusion. Earlier, she'd made several about-turns, to soak in the imagery. The Soundwalk audio and video contributed the base aura, but it was Patti Smith who governed the proceedings, and few orators could have succeeded so potently in her place.

This gig was a failure. Quite early on, Ches Smith's electronics setup conked out, and after a few cranks it cut out the p.a. speakers. In his Congs For Brums solo guise, Smith divides his time between a drumkit, a vibraphone and these troublesome gizmos. This calamity clearly derailed his momentum, and it was never really regained for the course of the set. Even so, the aims were admirable, even if the execution was not at its accustomed level of fluidity. The other problem was that the remaining elements of drums and vibes weren't really nestled together sufficiently (and neither were the brief bursts of electro-stutter that we did get to hear). The sequence came across as being akin to an instrument demonstration, as Smith shifted from one tool to another. It's very possible that the music is more integrated during a non-faulty execution, but on this showing it was broken up into its constituent parts, sounding too basic for the facilitation of excitement. It would still be a sound idea to catch a future Congs For Brums gig, unhindered by such malfunction.