Home » Jazz Articles » Chasin' the Bird: The Life and Legacy of Charlie Parker

Chasin' the Bird: The Life and Legacy of Charlie Parker 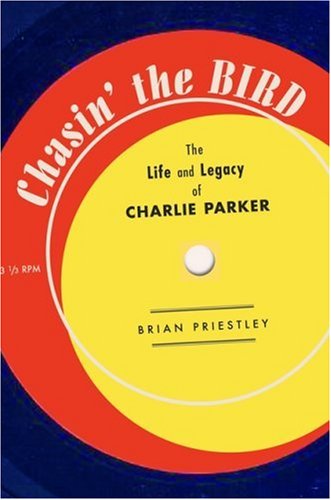 Brian Priestley is a recorded jazz pianist and arranger with extensive British jazz-radio experience to boot, and discovering that a biographer is himself a musician tends to impress me. Priestley is also co-author of The Rough Guide To Jazz (now in its fourth edition) and biographer of both bassist Charles Mingus and saxophonist John Coltrane, so again, in my preliminary assessment of his likely credibility, I put a virtual check in the "plus column.

In addition, Priestley is British, and I am fascinated at the thought that the work was compiled by him in unfamiliar surroundings in a foreign land. And finally, when I realized that Priestley first penned Charlie Parker in 1984, and that this paperback edition represents a revision and expansion of that short biography, I approached this volume with high expectations.

Those expectations were borne out from the first page. This is not only an extremely authoritative, accurate and well-documented tome, it's also a darned good read. For most jazz enthusiasts, the essential story of Charlie Parker—his early life in Kansas City, remarkable musical abilities, drug and alcohol abuse, and tragic death at age 34—is already well known. That is all in Priestley's story, of course, but there's so much more. Incidental information has come to light since publication of the first version, and with the passage of time, Priestley has gained in maturity and insight. As he himself put it, his "leanings towards composition and arrangement (and the consequent quirk of not wanting to throw away anything) led him to preserve virtually all of his prior text (except, of course, where it had subsequently proven to be inaccurate), "and add new layers, more akin to overdubbing than improvising.

What are some of the new things I garnered from this book? Well, for one, I learned that, despite many references to Charlie as "Charles Christopher Parker, neither his birth certificate nor his gravestone shows any middle name. Also, that Charles Parker Sr. was an itinerant singer and dancer who, two years before Charlie was born, presented his wife Addie with John Parker to raise; the youngster, nicknamed "Ikey, was apparently born to an unnamed white woman after Charles Sr. and Addie's marriage. Charlie's father was on the road and essentially out of the picture by at least 1930, when Charlie was ten. Whatever he had brought to the family prior to that time, it is obvious that both his wife and son felt abandoned by his defection. Charlie never experienced the parental pride from him that even Billie Holiday received from her father later in life. Charlie only saw him once, fleetingly at the former's wedding reception—Charlie's subsequent wife Doris described him as a "small gambler and pimp —before he was stabbed to death in 1939 by a woman friend, possibly a prostitute.

The stock market crash wiped out Addie's savings in 1929, and to pay the regular installments on her place at 1516 Olive Street, she not only took in lodgers, but also a second job, cleaning the Western Union office nights. Charlie was thus on his own at an early age, a fact attributable not only for his early experiences with jazz music, but also for his exposure to drugs and alcohol; after all, marijuana was perfectly legal until 1937.

If all this paints for you a picture of an emotionally fragile, attachment-deprived young man who was growing up much too rapidly, I think you're getting the idea. Add to this the oedipal shock of finding his mother in bed with a man, and the stage is set for Charlie's first marriage, at the tender age of fifteen. Patterns that will repeat themselves throughout his life are becoming established, in terms of relationships, drug and alcohol use and abuse, and obsessing after perfection, an ultimately self-defeating quest.

But, the music is here, too: the excitement, the brilliance, the bright lights and adrenalin; the relationship with other music being made at the time; the impact it has made on jazz music played since. Priestly has tracked down, listed, listened to, and described virtually everything Parker is known to have recorded, including all the rare, privately-obtained material that has surfaced in the last twenty years, and he has put it all into context.

The 60-page discography included in the back of the book provides the most complete and comprehensive compendium of Parker's work that has ever been assembled. And finally, Chapter 7 (The Song Is You), devotes more than a dozen pages to demonstrating the relationship of Parker's music to the blues, explicating Bird's improvisations, and explaining how and why this musician moved jazz forward in a manner essentially unrivaled in jazz history.