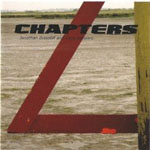 Unexpectedly, a trend has been developing among musicians associated with London's F-IRE collective to revisit the standards repertoire. It's not an area this experimentally inclined body of players usually inhabits, but the results so far—all recorded by duos—make it an engaging diversion.

Saxophonist Ingrid Laubrock and pianist Liam Noble were first off the block with Let's Call This (Babel, 2006). Noble returned to similar territory with percussionist Paul Clarvis on Starry Starry Night (Village Life, 2009). And now guitarist Jonathan Bratoeff and drummer Chris Vatalaro make their foray with Chapters. Each of these albums is a treasure well-versed in its source material and displaying much creative intimacy between its participants.

Almost half the tunes on Chapters are jazz standards or from the American popular songbook. Miles Davis' "Solar," Thelonious Monk's "Locomotive" and John Coltrane's "Lazy Bird" are only lightly recalibrated; Johnny Green's "Body And Soul," Frank Churchill's "Someday My Prince Will Come" and Ray Noble's "Cherokee" are so radically revamped that the sleeve credits extend co-authorship to Bratoeff and Vatalaro. The other eight tunes are either Bratoeff originals or co-written by Bratoeff and Vatalaro, some of them spontaneous electro-acoustic improvisations.

It says much for Bratoeff's melodic flair that the originals stand up well alongside the classics, and much for his harmonic sophistication that, their use of electronica aside, the performances wouldn't sound much out of place on an album recorded by guitarist Johnny Smith in the early 1950s. Vatalaro, an American drummer living in London, is an inventive and responsive collaborator, whether deep in a groove, as on "Alone Together" and the brief unaccompanied drum feature "The Marcellus Shale," or swinging perkily on "Locomotive," and generally moving things forward.

Electronica is used, subtly and inventively, throughout the set, not to provide background ambiances but to customize some of the natural timbres produced by the guitar and drums. Bratoeff's flowing single note runs, voluptuous chords and occasional rock-derived motifs are all from time to time given new sonic sheens, as are Vatalaro's fluttering brushwork (he spends more time on brushes than he does on sticks) and colourful use of cymbals.

There are occasional stormy moments, memorably so on the closing "Augur In The Coal Mine," but most of Chapters is delicate and softly-spoken. It sounds like two musicians playing for their own enjoyment in a spacious room full of sunlight. A bit like the YouTube clip below of Bratoeff's quartet performing at Charlie Wright's International Bar (though this room probably saw its last beam of sunlight circa 1950), only more so. Lovely stuff.

The Muybridge Line; Nothing Certain; Solar; Alone Together; The Marcellus Shale; Soon; A Chapter Ends; Wire Floor; Locomotive; Lazy Bird; Body And Soul; Someday My Prince Will Come; Cherokee; Augur In The Coal Mine.