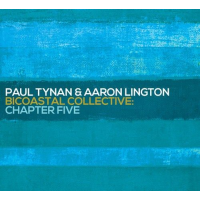 Chapter Five is the fifth recording by Paul Tynan / Aaron Lington's Bicoastal Collective, which derives its name from the fact that trumpeter Tynan lives in Nova Scotia, saxophonist Lington in San Jose, CA. What sets this CD apart from the others is that the Collective has morphed from a smaller version to a full-fledged eighteen- piece big band.

The music remains essentially the same with four compositions by Tynan and four by Lington, all of which draw their inspiration from the classic big-band canon. That impetus, however, is taken to some new and interesting places, perhaps best exemplified by Lington's expansive yet unassuming "Four Taiwanese Folk Melodies" (which collectively run for more than fifteen minutes) or Tynan's darkly meditative "Karma's Song," written, he says, for one of his best friends.

While Tynan and Lington, friends since their days together in the University of North Texas' famed One O'Clock Lab Band, assume the lion's share of solos, tenor saxophonist Dave Lown is showcased on Tynan's cordial "Charting Stars" and guitarist Noel Johnson complements Lington's husky baritone on the latter's "I Remember Every Day." Tynan, Lington and drummer Stockton Helbing are front and center on Tynan's fast-moving "More Than Just a Single Road," Lington, pianist Josh Hanlon and alto Bobby Selvaggio on his easy-riding "Little Wheels." Lington wrote the snappy opener, "Two Views," with (soloists) Tynan and Helbing in mind, while trumpeter Ken Edwards and trombonist Carl Lundgren add indispensable grit to his funky "'Sup?"

Lington, Selvaggio (soprano), tenor Marcus Wolfe and alto Steve Jones are the solo voices on the "Taiwanese Folk Melodies," whose movements advance from medium swing to rapid jazz waltz, a horn chorale with Lington's a cappella baritone, and a three-quarter-time ballad feature for Jones. Those who have encountered the Bicoastal Collective before shouldn't be surprised to learn that Chapter Five is as laudable as its precursors; those who haven't had the pleasure should hang loose and make themselves ready for a splendid listening experience.