By ROGER FARBEY
August 9, 2019
Sign in to view read count 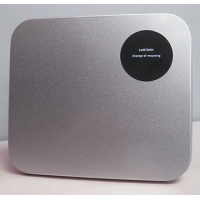 The Confront Recording's Collectors Series is distinguished by the packaging of its CDs which arrive in a DVD sized metal box. Rather than any cover art, there are instead simple stickers affixed to the front and rear denoting the artist, title and track names. The CD itself quaintly replicates the grooves and track markers of a vinyl record. These are limited edition runs of just a few hundred and sell at an attractively competitive price. But that's merely the icing on the cake, since what really matters is the calibre of the musicians involved. Amongst a burgeoning cohort featured on the label are improvisational pioneers Derek Bailey, David Sylvian, Keith Rowe, John Butcher, Phil Minton and label owner and bassist Mark Wastell, to name just a few.

Cartoon is comprised of a trio of the UK's leading improvisers. Chris Biscoe is perhaps the most widely known of the three. An alumnus of the National Youth Jazz Orchestra, he played with the big band from 1970 until 1973. Following his departure from NYJO, the self-taught saxophonist has played in a variety of ensembles including Chris McGregor's Brotherhood of Breath, George Russell's Living Time Orchestra, the Hermeto Pascoal Orchestra and the David Murray Big Band. He's also collaborated with the likes of Harry Beckett, Andy Sheppard and Graham Collier. However, he is undoubtedly most recognised for his work with Mike Westbrook with whom he's recorded over a dozen albums, the earliest being The Westbrook Blake (Bright As Fire) (Original Records, 1980).

Drummer and percussionist Roger Turner's first formal performance in improvisation was in a duo with Chris Biscoe for the British Council, Brighton in 1966. He's recorded on scores of albums featuring improvising luminaries such as Lol Coxhill, Trevor Watts, Veryan Weston, Phil Minton and the London Improvisers Orchestra. The youngest member of Cartoon is John Pope. But this bassist, a resident of Newcastle-Upon-Tyne, is no novice. He's a lecturer at Newcastle University where he gained a MMus in 2010 and runs Jazz North East's Improvisers Workshop. He also leads his own chordless jazz quintet playing music inspired by Ornette Coleman.

Despite only two tracks, there's almost an hour's worth of music on Change Of Meaning. "Unbuilding" was recorded live on December 3, 2017 at Bridge Hotel, Newcastle under the auspices of Jazz Northeast. Biscoe's alto paints a sonic picture with crystal clarity, his wailing and swooping notes underpinned by resonant bass and rolling, rumbling percussion. The trio assiduously follows Biscoe's lead throughout this mammoth set of nearly forty minutes duration which reveals an extraordinary three-way conversation. Following a short glissando-rich bass introduction, "On The Plate" features Biscoe on soprano, playing at his most lyrical, his saxophone tracing serpentine lines, once again closely mirrored by bass and drums. This relatively shorter track, weighing in at just over fifteen minutes, was recorded at Dave Hunt's West London studio on 3 March 2019. Despite the chronological gap between the two recordings, the music in the two sets is remarkably consistent, clearly demonstrating a natural collective compatibility with the three protagonists continually bouncing ideas off one another.