By John Bricker
August 9, 2019
Sign in to view read count 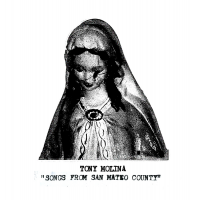 Songs From San Mateo County would seem like an afterthought from a musician with a normal discography. The compilation of 14 unfinished and unreleased tracks, most barely more than one minute long, gives each song barely enough time to make an impression before rushing on to the next. This brief project only makes sense coming from Tony Molina, a Bay Area singer-songwriter and punk guitarist dedicated to trimming songs down to their simplest, catchiest cores. Despite rough production and a few forgettable tracks, Songs From San Mateo County melts into a cohesive, thrilling power pop record.

After playing with lo-fi punk projects Violent Change and Ovens, Molina broke out as a solo act with 2013's Dissed and Dismissed (Slumberland Records), blending grungy production with pop songwriting inspired by The Byrds and The Beatles. With 2016's Confront The Truth (Slumberland Records) and 2018's Kill The Lights (Slumberland Records), his sound matured, embracing lavish, clean production while delivering his strongest hooks. Instead of further polishing Molina's sound and possibly ironing out its charm, Songs From San Mateo County returns to his early DIY aesthetic and updates songs written with past projects to unlock their full potential.

On "Word Around Town," Molina trades the original Violent Change track's washed-out, distorted guitars for clean acoustic strumming and baroque-pop arpeggios. Although Molina's vocals are mixed distractingly low, the song's beautiful organ, tambourine and dueling guitars overshadow its technical issues, especially when it delivers a satisfying dynamic structure in only a minute and 14 seconds.

Unfortunately, some tracks are just too short to make an impact, even if they serve as effective transitions from song to song. Ironically, "#1 Riff" is 29 seconds of simple, intimately-recorded acoustic arpeggios and folksy chords. Most of Songs From San Mateo County leans heavily into Molina's punk influences, so extending it into a full acoustic piece would have served as a fantastic counterpoint. Instead, "#1 Riff" is just a footnote.

Despite a few disappointingly brief songs, this compilation delivers a few of Molina's most satisfying tunes yet. "Can't Find My Way" immediately captivates by pairing lovely backing vocals with distorted guitars, accompanied by earworm vocal melodies, then drops into a mix of half-time drums and dueling guitar leads that scream dad-rock. In only 48 seconds, he perfectly represents his opposing pop and hardcore influences.

Songs From San Mateo County peaks with "Separate Ways," blending Molina's most memorable and melancholy crooning with the album's fuzziest guitars. Two guitar solos, each with a unique tone, one panned to each stereo channel, dominate the second half with dynamic melodies and expressive bending. "Separate Ways" is Molina at his best, using the abrasive sounds of his roots to elevate his addictive pop.

If you are looking for Tony Molina to further develop his sound, you will have to wait for his next proper album. But if you need more of his endlessly replayable, bittersweet power pop, Songs From San Mateo County is perfect.

Intro; #1 Riff; Not The Way To Be; Can’t Find My Way; Don’t See The Point; I’m Not Down; Fallin’; Been Here Before; Word Around Town; Hard To Know; Where’d You Go; Separate Ways; Don’t See Me Now; Outro.