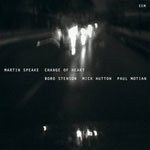 Change of Heart, alto saxophonist Martin Speake's first recording for ECM, will no doubt garner him some well-deserved international exposure. But he's been a fixture on the British scene for two decades, with a varied discography that a larger audience will now hopefully explore. This disc presents only one facet of Speake's interests, but it's as strong an entry point as any to his recent discography, which has included the exceptional Indian-influenced The Journey (Black Box, 2004) and an innovative tribute, Charlie Parker (Jazzizit, 2005).

In a 2004 AAJ interview Speake cited two key inspirations: pianist Keith Jarrett and drummer Paul Motian, in particular Motian's trio with saxophonist Joe Lovano and guitarist Bill Frisell. Motian's participation on Change of Heart, the end result of three prior British tours with Speake in the past decade, clearly holds special significance for Speake, who says "I really like Paul's tunes, simple yet incredibly beautiful.

With that premise as a clear model, Speake's eight original compositions on Change of Heart seem custom-fitted for Motian's textural approach to the kit, from the rubato tone poem "The Healing Power of Intimacy to the eloquent title ballad, where Motian implies a gentle swing while steadfastly (and characteristically) avoiding the obvious.

Joining Motian and Speake is pianist Bobo Stenson, no stranger to Motian, with whom he collaborated on Goodbye (ECM, 2005), and a highly interpretive player whose subtlest turn of phrase often says a great deal. His impressionistic strength is put to terrific use on "Bareface Thieves, whose shifts between hard swing and temporal flexibility suggest another of Speake's early influences, saxophonist Ornette Coleman. Stenson's ability to create a harmonic underpinning that's both suggestive and open-ended is especially notable on the nine-minute "Buried Somewhere, which evolves almost imperceptibly from a free-time duet with Motian into a full quartet piece where bassist Mick Hutton introduces a more defined pulse.

Hutton is another British player deserving greater recognition, although stalwart ECM fans will know him from First House, a quartet featuring pianist/horn player Django Bates which released two albums on ECM in the late 1980s. He's the ideal person to round out Speake's quartet—not only because they have a shared history, but because he's as implicit a player as the rest of the quartet, managing to combine tasteful melodism with occasional dissonance to create an anchor that's both elastic and unshakable.

Speake's playing can be as enigmatic as his writing. The lyricism and subtlety of both his written and improvised melodies sometimes unfold so gradually that one needs to take a mental step back to absorb it all. That characteristic well suits the strength in understated elegance that marks Change of Heart—a fine album that, by revealing more with each successive listen, will undoubtedly stand the test of time.

The Healing Power Of Intimacy; Change Of Heart; Barefaced Thieves; Venn; Buried Somewhere; In The Moment; Three Hours; In Code.