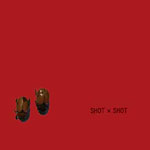 From the very first notes of this debut album, it is abundantly clear that it's an important record, and these young men (the oldest is 26!) have that special something.

Jazz, or to use a term preferred by Bob Rusch of Cadence, "creative improvised music," is the epitome of existential artistic creation. The process yields coherent music that lives by its own rules and internal logic. Everyone understands the language of commonplace jazz that encompasses harmony, rhythm and structure, but the members of this group challenge themselves and their audience by stretching or breaking the rules, never descending into chaos.

The music on Shot x Shot feels inseparable from the lively acoustics of St. Mary's Church in Philadelphia, the band's home town. On the opening track, "Bee Assassins," one can hear the noise floor of the recording and directly sense the large space. Dan Capecchi's cymbal screeches and squeals sound like animals in a rain forest. There is no time and no sense of how long the piece will take to develop, just like in classical Indian music.

The theme that the alto presents after the percussion intro is quite haunting, with some perfectly placed "out" notes. The tenor sax enters with a supporting pedal note and the combination can almost be heard as bagpipes.

This music presents one paradox after another in an impressive way. It's clearly tonal, and yet the playing is quite harmonically free. The theme permeates every note that Dan Scofield (alto) and Bryan Rogers (tenor) play, and its connection to the rest of the piece can be viscerally felt, yet it is not explicitly performed again until the very end. Subsequent listening uncovers the fact that Matt Engle's bass subtly holds everything together; the work has a rhythmic coherence without spelling out an obvious pulse.

All of this reveals a group intelligence at work, striking the perfect balance between too much and too little structure. One group member or another might compose a tune, but the final product is by Shot x Shot, a dynamic of individual freedom subordinated to the group mind. This music is full of moving passion and a spellbinging excitement which results from the combination of intellect and emotion.

This very refreshing disc is worth playing repeatedly in order to uncover deeper layers of thought and feeling. Easily on my short list for the best recordings of 2006, Shot x Shot is amazing music, debut or no debut.