By DAVID ADLER
September 1, 1999
Sign in to view read count 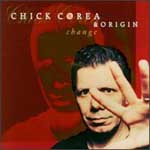 If you dig Chick Corea but haven’t yet heard Origin, run — don’t walk — and pick up this record. And pick up their debut record from last year while you’re at it. It’s the most exciting stuff Chick has done in years. His bandmates in Origin are primarily young, up-and-coming, straight-ahead jazz musicians. And that’s refreshing. Origin’s music is not a mere showcase for hotshot soloists. Chick’s last acoustic jazz outing, his Bud Powell tribute band, was wonderful. But in the final analysis, it was a handful of amazing, famous players getting together and playing Bud Powell tunes. Origin has a sound. And it’s not a sound you’ve heard from Chick Corea before, although it bears his unmistakable stamp, and thankfully so.

An important facet of Origin’s unique sound is its multiple horns. There’s Steve Wilson on soprano and alto saxophones, clarinet, and flute; Bob Sheppard on tenor sax, bass clarinet, and flute; and Steve Davis on trombone. These combinations of horns call forth some beautiful textures, especially on "Armando’s Tango," "L.A. Scenes," and "Home." Other highlights include the shout chorus that sets up Chick’s piano solo on "Wigwam," the Kind of Blue -style harmonies of "Early Afternoon Blues," the intricate horn/rhythm section interplay of "Before Your Eyes," and the forceful melody and quasi-chamber music ending of "Awakening." All these guys are strong soloists, of course, but it’s the tight horn charts — and the equally tight counterpoint of bassist Avishai Cohen and drummer Jeff Ballard — that provide a lot of the excitement on this disc.

Overall, it’s safe to say this is some of the most ambitious writing of Chick’s career. He’s outdone himself. Surprises abound: the curious atmosphere of early jazz on the eclectic and contemporary "Armando’s Tango"; Chicks’s use of the marimba on "Wigwam" and "L.A. Scenes"; the overdubbed handclaps on "Little Flamenco" (the best track on the record, in my opinion); the stop-start form of "The Spinner," a tune that is simply uncategorizable; and the haunting melodies of "Home" and "Night (Lylah)," the latter composed by bassist Cohen. And yet amid all the newness and originality, there are nods to Chick’s classic moments: the 3/4 minor blues of "Wigwam" is strongly reminiscent of the "Now He Sings, Now He Sobs" era; the use of flute in "Little Flamenco" recalls his work with Joe Farrell and Steve Kujala; and the wonderful grandiosity of "Awakening" is, well, it’s pure Chick. There’s also a nice piano trio feature, "Compassion (Ballad)," which is based on the standard "It Could Happen To You." Origin played Chick’s up-tempo arrangement of the standard on its debut record, so "Compassion" is an interesting contrast.

Amazingly, all the songs were recorded in Chick’s living room with no headphones and no overdubbing, save for the aforementioned handclaps and one marimba part. "All takes are complete takes from beginning to end," writes Chick in the liner notes. The band thus achieves a perfect balance between spontaneity and rehearsed cohesion. It’s marvelous to hear, and although Chick has a constant need to Change, let’s hope he sticks with this band for a while.