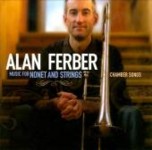 There is a magnificent sequence on "Paradox," about four and a half minutes into the piece, as it races upward. The instruments trade interpretations of the song's conundrum, its paradox, the inverted chord changes on which the song is built—saxophones, then trumpet, the blat-blat-blat of Alan Ferber's trombone, before the strings get their say. It is here that the true ingenuity of the composer's musical apparition comes into light. The truth is that Ferber appears to have heard every instrument as it would ultimately sound when the magic of these songs must have come to his inner ear. This is why Chamber Songs: Music for Nonet and Strings has that burnished quality of finish to it. Although the composer posits that it took many live performances to determine the final arrangements and by inference, the tone and manner of the album, it appears entirely in the realm of possibility that Ferber "saw" the tones and shades and colors of the songs on a rather large canvas, as they are played, long before they were actually written.

Ferber's music—his Chamber Songs—are not uniquely inventive in form, but what the composer does so well is create swelling, swinging music within the traditional, ten-part song and in the 32-bar format as well. All his introductions are dramatic—a collision of twisting melody, richly endowed with irreverent harmonics—and create such suspense that when the downbeat arrives there is a shock, a surprise in the form of, say primordial polyrhythmic thunder, as in "Ice Cave," where the other Ferber, drummer, Mark Ferber performs with fiendish beauty to drive the song onward. On "Union Blues," a chart that could well be the composer's tribute to Charles Mingus '50s long form music, Alan Ferber introduces the complete ensemble by interlocking the blues stanzas, while various aspects of the tonal canvas are unveiled as the song progresses. Throughout the album, especially on "Sedona," the composer's skill in interpreting the ultimate sound of horns and writing perfect material for reeds, woodwinds and brass is manifest.

The album unfolds like a dramatic large canvas, a mural of music perhaps. With each song, the instruments—especially the nine-piece string section—daub the fabric of the music with spectacular color. The magnificent conclusion of "Sedona" is a case in point. But it is "In Memoriam" where it all comes together in a fine melange. The majesty of the molten brass and breathless woodwinds together with the elemental sadness of the strings meld into a breathtakingly fine mixture, its grains so completely ground that it drives the narrative into a seamless song of exquisite finality.

Alan Ferber's nine Chamber Songs: Music for Nonet and Strings has outstanding character. His style is painterly and he is unafraid to tackle the dense coloration that comes with the mixing of dramatically opposite tonal landscapes—strings opposing brass and woodwinds. Rather he makes the most of diametrically opposed tonal palettes with devastatingly beautiful effect on the nine charts on this memorable album.