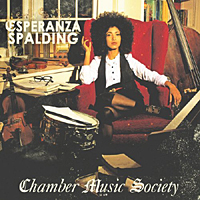 The jazz world hasn't been the same ever since the twenty-something Esperanza Spalding—the Oregon-born, Texas-based bassist/singer/composer/educator—burst on the scene at the change of the century. Her story as a self-taught, home schooled prodigy who graduated from Berklee and became that institution's youngest instructor; who gigged with everybody from Patti Austin and Pat Metheny to Joe Lovano; and who released two critically-acclaimed CDs as a leader (the last one stayed on the Billboard jazz charts for seventy weeks), is already the stuff of legend. Her beyond-her-years musicianship, multilingual vocals, world-embracing rhythms and genres, youthful beauty and appealing stage manner, have already made her the voice of a new generation of polycultural, jazz-based musicians.

On this, her third CD, Spalding augments her global-centric moods and grooves with a string trio, along with superb and simpatico support from drummer Terri Lyne Carrington, pianist Leo Genovese and percussionist Quintino Cinalli, on eleven-tracks of originals and standards, with co-arrangements by the veteran Gil Goldstein, blurring the boundaries of jazz, world, and classical music genres. There are two to things to note here: one, to say that Spalding's powers as an instrumentalist and vocalist have grown since her last recording is an understatement. Her bass playing is more economical and expressive, and her vocals are suppler and stronger; two, although this project may be perceived as by some cynics as a calculated grab for "Third Stream" cred, it is actually a return to Spalding's classically-trained roots, growing up in Portland, where she performed in a local orchestra from the ages of five to fifteen.

Opening and closing with the plaintive, meditative "Little Fly," inspired by a William Blake poem and "Short and Sweet," a brushed-stroked selection that rings with Ravel-ian overtones, the CD is propelled by Spalding's fluid and formidable bass lines, complimented by her angelic and agile, alto-soprano voice singing lyrics and vocalese, especially on the tango-fied reading of the standard "Wild is the Wind," the folkloric, "Apple Blossom," featuring the Brazilian superstar Milton Nascimento, and an ingenious, contrapuntal vocal beat-box take on Antonio Carlos Jobim's classic, "Inutil Paisagem," with vocalist Gretchen Parlato, and sans trio and strings. The peppery "Chacarera"—named for an Afro-Argentine dance rhythm made famous by the Lalo Schifrin theme for the TV series Mission Impossible—best highlights Spalding's ability to swing on foreign-born rhythms, while "Really Very Small" showcases the leader's ease at negotiating the Latin tinge.

Given her youth, it would be premature to suggest that this superb CD represents a specific direction for Spalding (her next CD will feature radio-friendly compositions). But this mature and ambitious recording represents the limitless potential of an ever-evolving artist who can draw from any musical source on the globe, and make music that is personal, profound, unique and impassioned.