BY TROY COLLINS
November 25, 2010
Sign in to view read count 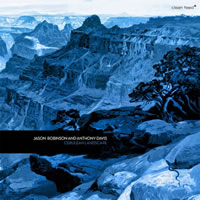 "If Ellington were to collaborate with science fiction author Samuel R. Delany, one might encounter a cerulean landscape." This evocative quote from the liner notes to Cerulean Landscape, multi-reedist Jason Robinson's long-awaited duo album with legendary pianist Anthony Davis, paints a vivid picture of their mutual admiration for the work of Duke Ellington and his colorful interpretations of the blues—in all its forms.

Robinson has been performing live with Davis (his former professor) since 1998, subsequently recording their first duets for his 2002 concept album Tandem (Accretions). An active member of both the East and West Coast scenes, Robinson is a gifted artist on the rise whose concurrently released debut as a bandleader, The Two Faces of Janus (Cuneiform, 2010) offers a compelling demonstration of his varied talents.

An esteemed member of the AACM whose reputation was established in the mid-1970s Loft Jazz scene, Davis went on to compose award winning operas like X, The Life and Times of Malcolm X and Amistad, in addition to numerous chamber, choral and symphonic works. Cerulean Landscape is a return to form for the veteran improviser, featuring some of his most capacious and unfettered soloing in years.

Like Davis, Robinson's aesthetic seamlessly combines inside and outside approaches. Structuring his narrative solos with a keen architectural logic, Robinson gracefully pivots from plangent refrains to coarse screeds, incorporating an array of extended techniques into expansive ruminations that trace their lineage from Coleman Hawkins to Albert Ayler.

Balancing mainstream and avant-garde concepts with characteristic grace, Robinson and Davis' congenial interplay offers a consummate summation of the jazz tradition in its most conversational and fundamental form—the duet.