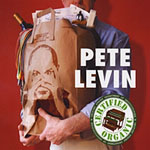 Pete Levin is sometimes overshadowed by his brother Tony, an in-demand player in the art-rock world (Peter Gabriel, King Crimson), who also built serious jazz cred in his youth with vibraphonist Gary Burton and pianist Warren Bernhardt. But keyboardist Pete Levin has built a fine discography of his own more closely linked to the jazz world. A lengthy stint with composer/arranger Gil Evans, and session work with guitarist John Scofield and trumpeter/composer Terence Blanchard helped spread his name, but it's his recent solo work that's most worth visiting. Drawing from the same organ jazz roots that defined Deacon Blues (Motema, 2007), on Certified Organic Levin recruits a larger cast of characters for an album high on groove but broad in reach, with elements of swing, soul-jazz, funk, fusion and more.

Mike DeMicco is back from Deacon on Levin's modal fusion workout, "Patience," where the guitarist's grungy tone turns a potentially ethereal track more visceral, and "When I Was Young," a lithely swinging tune that updates guitar icon Wes Montgomery's early '60s organ trios. Joe Beck, who sadly passed away in July 2008, also returns for a dark take of the Kennedy/Spolansky ballad, "Where Flamingos Fly" and Levin's "The Face in the Mirror," its slightly countrified waltz time a reminder of just how versatile this sadly undervalued guitarist was, despite leaving a significant recorded legacy.

Levin's own multifaceted nature drives the record, starting from the get-go with his funkified "I'm Falling," where guitarist John Carridi's chunky rhythm playing locks hand-in-glove with drummer Harvey Sorgen's in-the-pocket groove. Levin solos with the organ-equivalent of Scofield's uncanny ability to take things out just enough to create a palpable release when he brings it back in, while Carridi's overdriven solo is bop- inflected but blues-centric. Moacir Santos and Mani Telles' "Nana" is equally funk-driven, but percussionist Ernie Colon provides a link to its Latin roots, while Levin winds his way through a potent vamp and some more challenging changes.

While grabbing a larger chunk of compositional credit this time around, Levin also finds new approaches to popular tunes. "Love 4 Sale" takes Cole Porter's classic to unexpected places with a combination of some surprising re-harmonization, shifting feels and, after Levin's extended and dynamically building solo, a clean-toned turn from Cariddi that again blends bop with plenty of blues edge.

But it's Levin's arrangement of Jaco Pastorius' often-covered "Teen Town" that's Certified Organic's biggest surprise. Usually a bass workout, this time the knotty but singable theme isn't its primary focus; it's a steadily-building trade-off between Levin and saxophonist Erik Lawrence. With it, as with all of Certified Organic, Levin ups the ante and aims to increase his visibility as a leader. Demonstrating undeniably fine skills as composer, arranger and performer whose reach goes well beyond Certified Organic's groove-happy veneer, it's an album that easily places Levin in the same company as Larry Goldings, Gary Versace and Dan Wall.

I'm Falling; Nana; Love 4 Sale; Patience; Teen Town; Where Flamingos Fly; Out of Darkness; When I Was Young; The Question of U; The Face in the Mirror.