By KURT GOTTSCHALK
October 1, 2002
Sign in to view read count 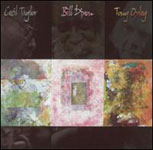 I have a confession to make. One night at the Hotel Colibri in Victoriaville, Quebec, after a resoundingly disdained set by Cecil Taylor, Bill Dixon and Tony Oxley, I rode up in the elevator with Oxley and Victo festival promoter Michel Levasseur. My room was on the first floor, but I wanted to hear what they had to say.

At best, most people I spoke to called the set a disappointment. The trio went on over an hour late and played a short (by Victo standards) set. The performance seemed lackluster, perhaps weighed down by Dixon's floundering trumpet and electronics. There was none of Taylor's trademark waves of energy and there seemed to be little communication between the players.

On the elevator ride, Levasseur was silent, but after Taylor's late arrival at the fest two years ago, forcing a last-minute rescheduling of the final night's program, he might have been less than elated. But Oxley was encouraging. When you go back and listen to the tape, he said, you'll see there was a lot going on there.

OK, so I'll admit it. Oxley was right and we were wrong. As evidenced by this release of the set, the music played that night was intimate, even delicate. It still seems that Dixon didn't quite sit down at the table with his mates, and his electronic effects don't do him any favors, but credit seems due to him for keeping the set at an unusual slow burn. There aren't the displays of pyrotechnics evidenced in Taylor and Oxley's duo performances. Instead, piano and drums dance lightly around the trumpet's background wash, creating a music both sparse and dense. The titles, mathematical formulas comprised from the player's initials, offer little guidance for deciphering this perplexing, pastoral set. "B+T+C" seems evident, and "T=CxB" could be speculated upon, but the closing, 81-second piano solo carries the title "CxBxT+T", forcing me to abandon any hope of gaining understanding.

Ultimately, the disc is an important chapter in Taylor's extensive, challenging discography. Do all Cecil Taylor CDs sound the same? Well, no. But how they differ, with the exception of instrumentation, is hard to pin down. But here is a different, and beautiful, mood from the master.

This review first appeared in the October 2002 issue of All About Jazz: New York .