BY JACK BOWERS
October 1, 2002
Sign in to view read count 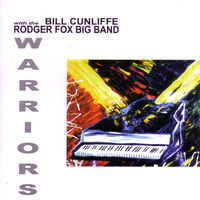 Having known of Bill Cunliffe only as an outstanding Jazz pianist, I was thrilled to learn via receipt of trombonist Rodger Fox's latest album that he's an outstanding big—band composer / arranger as well. Six of the compositions and all of the charts on Warriors are Cunliffe's, and there's not a blank cartridge in the canister. Cunliffe and Fox met when Bill traveled to New Zealand in '96 to perform with his trio and a quartet led by Fox, that country's most prominent trombonist / big—band leader.

Later, while en route from Auckland to Napier, the plane in which Cunliffe was flying encountered turbulence, leaving him temporarily indisposed but inspiring him remember the event with a song, "Puking Over Napier." Fox heard the tune, urged Cunliffe to arrange it for his band, and the rest is history. Remarkable as Cunliffe and Fox having made a connection halfway around the world may seem, their collaboration is, as the saying goes, a marriage made in heaven. Cunliffe's themes and arrangements are exemplary, but no more so than Fox's estimable ensemble, which brilliantly enlivens every one of them, starting with Ellington's irrepressible "Rockin' in Rhythm" and ending with the rockin' remembrance of Cunliffe's choppy flight, its name now shortened to "Napier." The perky "Dunedin" is based on Louis Armstrong's "I'll Be Glad When You're Dead, You Rascal You," and "All's Well in Wellington," another up-tempo romp, an expanded version of music written by Cunliffe for the Hard Copy television series.

The longest and most elaborate piece, "Te Wero Nui," is Maori for "the ultimate challenge" or "a supreme gift," while "The Warriors," whose dramatic framework is underscored by drummer Grahame Cope and trumpeter Jon Papenbrook, is dedicated, says Cunliffe, "not only to the brave spirit of the Maori people but also to the great Jazz warriors Buddy Rich, Maynard Ferguson and Woody Herman, who kept the tradition alive in the face of almost insurmountable odds." Rich is especially close to Cunliffe's heart, as the arrangements of "Rockin' in Rhythm" and "Sophisticated Lady" were written for Buddy while Bill was a member of his big band in 1984—85. Completing the album is the balladic "Epilogue," on which Cunliffe's piano is featured (as it is on "Rockin' in Rhythm," "Sophisticated Lady," "Wellington," "Te Wero" and "Warriors"). Guest tenor Bob Sheppard is sharp and fluent on "Te Wero Nui" and "The Warriors," and there are trenchant solos by Fox on "Dunedin" and "Napier," tenors Pete France ("Rockin,'" "Wellington") and Cameron Allen ("Rockin,'" "Lady"), soprano Godfrey De Grut ("Lady") and guitarist Neil Watson ("Wellington," "Napier").

Fox and Cunliffe are a winning team, and Warriors ranks among the more successful big—band albums in what has been a very good year for them.