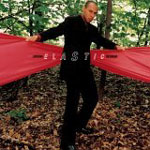 There's no doubt that Joshua Redman is well on his way to defining a singular voice. But the critical response to Redman's art has often been mixed, the irony being in the fact that his original material is quite distinctive, yet possibly just a bit too glossy to satisfy those 'dyed in the wool' types. Elastic will do nothing to attract those looking for more lofty aspirations, for it is hook laden and funky to the max. Those who rush to claim this a snore fest or yet another organ record however will unfortunately miss an immediately likable disc and one that does offer a new perspective on Redman's current muse.

His first decidedly funk-based album since the 1996 set Freedom in the Groove, Redman goes for a wider sonic pallet on Elastic. Updating the organ trio format, Redman's partners include Sam Yahel and the ubiquitous Brian Blade on drums, the trio garnering an even bigger sound on some cuts through the sagacious use of overdubbed parts and harmony lines. Of a different cloth than the previously released Yaya3, which featured the same trio but was clearly more of Yahel's record, Elastic goes for a layered effect and some tricky polyrhythms, such as the offbeat syncopation that propels 'Jazz Crimes.'

The disc kicks off with 'Molten Soul,' a firm backbeat supporting a cheery line that gains body through the overdubbing of some saxophone harmonies. A great follow up, the previously mentioned 'Jazz Crimes' is like pure bebop, but with a funky James Brown twist. These two tracks alone set things off to an auspicious start. Going for a more relaxed atmosphere, a ballad mood sends 'Can a Good Thing Last Forever?' on its way via Yahel on piano and Redman on tenor, yet both men plug in further down the line, the saxophonist's electronics injected sparingly and with much finesse.

While Yahel uses the organ as his primary instrument, he freely mixes in other electronic timbres and blends them like a great alchemist. He gives 'Still Pushin' That Rock' some period flavor by comping on the Fender Rhodes and soloing on what sounds like a vintage Moog. Blade's role here in no less important, the drummer sounding almost as if he's in perpetual motion throughout, while contributing a few choice solos such as his complex interactions at the tail end of 'News From the Front.'

Although an audience's reaction to any artistic endeavor is ultimately personal, some pieces seem to speak with great fluency and attraction and others are more difficult to decipher. Redman's work here not only speaks with clarity but it also rewards repeated exposure. Any disc that keeps finding itself in my player, when so many don't merit much past two or three spins, recommends itself and Elastic does just that.