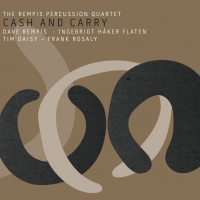 Success for each of these players has limited their time together. While Rempis, Daisy and Rosaly all hail from the Windy City, Norwegian bassist Ingebrigt Håker Flaten lives in Austin, Texas, and is in demand as a leader of his own quintet and sextet, and as a member of multiple groups including Atomic, The Thing, The Young Mothers, and Scorch, to name but a few. Likewise Rosaly and Daisy perform in nearly forty (yes, forty) different ensembles including multiple outfits they lead. There is, of course, a cross-pollination between these musicians as sidemen, leaders, and collaborators, and so picking up their conversation, often where they left off, is quite natural.

As the organizer and namesake of this quartet, Dave Rempis has matured into a natural leader. Maybe it was his time under the tutelage of Ken Vandermark that drew out his governance, but his varying projects from The Engines, Ballister, The Chicago Reed Quartet, Wheelhouse, a duo with Lasse Marhaug, and his trio with Joshua Abrams and Avreeayl Ra, are evidence of a musician in full bloom.

As this is a fully improvising quartet, the possibilities here are limitless. The first track, "Water Foul Run Amok," which clocks in at 39-minutes, begins with a room- clearing attack from Rempis' tenor—an aggressive drive of bass notes by Håker Flaten, and the double barrage of Daisy and Rosaly. Once the players have blown out the accumulated carbon of their engines (about nine minutes into the piece), and the bar patrons that thought this was karaoke night have departed, they take their collective feet off the accelerator. Over bowed bass and a left channel/right channel percussion conversation, Rempis pulls back into a contemplative mode. The band's dialogue is clarified here. Rosaly and Daisy maintain a symbiotic relationship, Rosaly is quite often about the groove and Daisy the inflection.

Deep within the music there is a pulse that carries this music, and it is mostly directed by Håker Flaten's bass. Switching to baritone, the music gets even more quiet, and at the same time more rigorous. As the piece ramps up, the insistence of the music exhausts the piece.

The brief, in this band's terms, "Better Than Butter," at 15:29, opens with Håker Flaten soloing over the rattle tick buzz of percussion. Rempis enters favoring a coat of blues. The music gels inside their maelstrom of percussive energy. The tap and nod of the music races the heart, cleanses the soul, and demands and 'Amen' from the crowd.