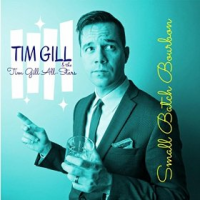 The second album from trumpeter, vocalist and big band leader Tim Gill & the Tim Gill All-Stars, Small Batch Bourbon features spirited arrangements of fifteen tunes from the American Songbook, the pop idiom and other classic standards in showcasing good old-fashioned straight ahead, traditional big band music at its best. One thing is for sure, the swinging music on this recording was produced having one fun-filled frolicking good time with some pieces highlighted by some shouting and comedic interchange between the leader and the band leaving the impression that—though the music is terrific—the group may have had one heck of a good time recording it.

Backed up by his working nine-piece light ensemble plus some additional help, the music kicks off on the traditional Sinatra staple "A Foggy Day" with Gill on vocals and the band playing powerful and brassy, a wonderful rendition that the Chairman himself would be proud of. The classic "Unchain My Heart," is another swinging piece featuring Edmund Velasco on tenor and trombonist Mike Johnson doing the honors on solos. Vocalist Adryon DeLeon appears on three tracks beginning on the familiar "L-O-V-E," then on the Gershwin brothers classic "Let's Call the Whole Thing Off" and the sizzling "Comes Love."

Gill's original title track finds the leader on a lively vocal performance and highlights the solo chops of tenor saxophonist Kirsten Edkins and pianist Adam Bravo—all laying down one hot piece performed with gusto and a lot a fun. Bobby Hebb's traditional "Sunny" is clearly one of the highlights of the disc while Johnny Burke's "Pennies From Heaven" showcases the fun interchange between band and leader and shedding some limelight on Gill's trumpet sound along with the tenor sounds of Morgan Jones.

The leader confesses to the band and all that he just can't dance and proceeds to sing the lyrics of the immortal "I Won't Dance" after a shocking response from the band on his uncanny admission of course, all done in jest with drummer Jimmy Ford and baritone saxophonist Phil Moore on brief solos. Arguably the best instrumental solo of the album goes to alto saxophonist Jeremy Lappitt who tees off quite nicely on a verse from "You & the Night & the Music." Other notable pieces include "Arthouse Façade," "I'm Just a Lucky So-and-So," "You Must Have Been a Beautiful Baby" and the finale "Hey, Good Lookin,'"

A Foggy Day; Unchain My Heart; L-O-V-E; Small Batch Bourbon; Sunny; Let's Call the Whole Thing Off; Pennies From Heaven; I'm Just a Lucky So-and-So; I Won't Dance; Benny's Bugle; You & the Night & the Music; Comes Love; Arthouse Façade; You Must Have Been A Beautiful Baby; Hey, Good Lookin'.