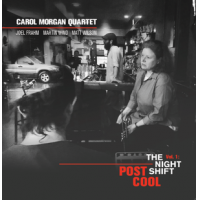 After reaching Texas escape velocity, Morgan migrated north, attended and graduated from Juilliard, having studied with Chris Gekker, Mark Gould, and Ingrid Jensen. The trumpeter has created an impressive body of work in a relatively short time Her discography as a leader includes the early recordings Passing Time with the Carol Morgan Quartet and Classic Morgana. Morgan began a sharp ascent with the release of her ground-breaking trio vision Opening (Blue Bamboo Music, 2010) followed by 2011's quartet release Blue Glass Music (Blue Bamboo Music) and Retroactive (Blue Bamboo Music, 2013). Save for the latter Retroactive, Morgan stays within the lines of the traditional vernacular. On Post Cool Vol. 1 The Night Shift, she continues the same, this time with her elbows stuck out.

Morgan's quartet here is the same that who she included on Blue Glass Music. A post-modern piano-less quartet, the group demonstrates dense empathy in their interactions. Where Gerry Mulligan and Chet Baker's similar quartet of the 1950s was almost Baroque in character, Morgan recasts the format in very modern terms, recreating classics and blending in original compositions. Horace Silver's "Strollin'" opens the disc in a very mainstream way, featuring a brooding Martin Wind bass solo. The sacred "A Night in Tunisa" follows, and this is where Morgan and tenor saxophonist Joel Frahm properly deconstruct the bebop piece, casting it properly in to the post-bop cataclysm created by drummer Matt Wilson. Where Frahm's solo is free-wheeling, Morgan remains almost chaste in her well-constructed solo. "Night," a Morgan composition, is based on a delicate and lengthy ascending and descending line that she and Frahm solo around. Tadd Dameron's "On a Misty Night" dovetails out of "Strollin'" and into an intensely introspective "Autumn Leaves." Morgan is neither content to remain in a fixed stylistic location, nor venture too far from it, thereby expanding the present.

Strollin’; A Night in Tunisia; Night; On a Misty Night; Song for Mom; Autumn Leaves3.