By Trevor MacLaren
June 8, 2005
Sign in to view read count 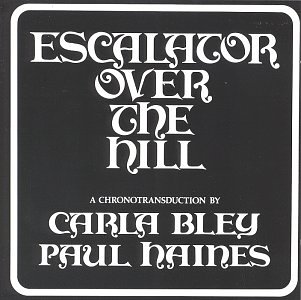 Carla Bley and Paul Haines
Escalator Over The Hill
ECM
1971


The late '60s and early '70s played a great role in the development of youth culture and politics, but it was also a heady age for jazz, where the great changes of funk, rock, and counterculture seeped into improvised music and changed it forever. Not only were the established movers and shakers of jazz creating a stir, but also several new voices were greatly affecting what jazz could and would be. One of the most eclectic and brilliant of these was Carla Bley.

Bley in many ways can be seen as one of the few great jazz composers of the post bop era. The pianist is often regarded more for her work as a composer than for her chops. For an early example, on her then-husband Paul Bley's amazing ESP release Closer shows off some of Carla fine work as a composer. During this period, she became one of the founders of the Jazz Composer's Guild Orchestra before becoming a cult icon in the world of avant-garde jazz. In 1967 vibraphonist Gary Burton recorded her genius song cycle A Genuine Tong Funeral, where she was also featured as a pianist. This record first gave her public attention and led to her composing and arranging one of jazz's finest anti-war records, Charlie Haden's Liberation Music Orchestra. But the record that brought her into the full realm of jazz was Escalator Over the Hill.

Escalator Over the Hill is a huge, expansive, and all-encircling work that was originally released on a three-LP set. Even today, that seems a bit extreme for a debut release, but it's even more remarkable given that jazz at the time was experiencing a severe decline in popularity. But what is even more interesting is that the record works on the premise of being a conceptual opus. Though it has often been described as a jazz opera, that description fails on many levels. An opera, no matter how abstract, tells some sort of a story. Nowhere on this set are there any lyrics written by Paul Haines that really suggest a cohesive narrative.

The work by Haines, who is classified as a "jazz poet, consists of equal parts rambling beat poetry and interesting yet nonsensical lyrics that work more in the context of Captain Beefheart's Trout Mask Replica than inside a unified story structure. Yet his bits are interesting and reflect the "far out surrealism and dadaism that was a big part of this period. Although the lyrics are bit crazy, they appeal the free chaos of the record and even flesh out the overall ideas projected on the album. The album does work as a concept record, much in the same way as the Beatles' Sgt. Pepper's Lonely Hearts Club Band, the Mothers of Invention's Freak Out!, or Ornette Coleman's orchestral masterpiece Skies of America. Working from track to track with bits of poetry and vocals, the record comes alive in a variety of ways.

Throughout the record Bley's piano works in the background and allows her skills as a composer come to the forefront. As well, she shows a determination to work from traditional elements to all other extremes of music. Her combinations, ranging from bop to Kurt Weill's pre-WWII cabaret music to the sort of pure, raw aggression that could easily fit onto an early Anthony Braxton record, make this one of most interesting works in the canon of avant-garde jazz. Between the thirteen-minute cut-up opening piece "Hotel Overture" and the all-encompassing, Zappaesque 27-minute closing epic "...And it's Again," there's nothing left to the imagination.

Much like discs by the aforementioned Frank Zappa, the record utilizes rock at a variety of points that display aggression. Unlike Zappa's music, the rock doesn't really sound or grasp the conventions of rock music; here it seems merely like a tool, rather than a wholehearted expression, unlike the use of world music and jazz on the album. Unfortunately, at times the use of rock mixed with vocals sounds a bit too much like it might fit into the rock musical Hair. Being the first of its kind, Hair sounded like what New York theater composers and playwrights thought rock music and youth culture should sound like. But Hair was a product of its period as is this record. Musicians like Zappa and Steely Dan would find the perfect alchemy of rock and jazz.

Not to say that this set does not work. This opus is truly one of the most unique recordings that has ever graced modern music. Due to Bley's unrelenting fearlessness in surrounding her compositions with influences from around the world, this results are all the richer. Interestingly enough, the record features vocals from a young Linda Ronstadt on "Why," some clarion trumpet from Don Cherry, and a trio composed of John McLaughlin, Jack Bruce, and Paul Motian. As well, Carla gets started with early experimental big band pieces here. Overall this now two-CD set may seem a bit dated and grandiose, but nostalgic expanse is one of the great features of Escalator. It sounds unlike any other jazz recording ever. The genius of Carla Bley and the amazing ideas she incorporates into this record (and its followup, Tropic Appetites) make it worth searching out.