BY GLENN ASTARITA
December 6, 2010
Sign in to view read count 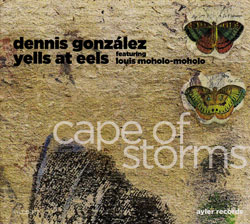 Featuring fabled African and UK drummer Louis Moholo-Moholo, the band takes it time developing motifs that are chock full of subtle surprises and deviations, propagated by the dual percussion initiatives. On "Tag," for example, Moholo-Moholo instills a militaristic-like drum pattern that sets the stage for a powerful gala, augmented by the bassist's linear and trickling notes. Here, the leader launches a brisk storyline over-the-top via edgy and stinging choruses. Dennis Gonzalez acts as the igniter as the band picks up steam, underscored by the polyrhythmic flurries and tempered by soft overtones.

The trumpeter's impressive legacy moves forward in contrast to the sometimes tenuous progressive-jazz movement. Gonzalez's music serves as the antidote to the worn out situation where many jazz musicians are more concerned with rummaging through tricky time signatures and placing compositional form in the backseat. No doubt, Gonzalez' artistry resides in the upper echelon of the multifaceted jazz vernacular.