Over a long career, Miles Davis had plenty of great partners, so it’s hard to say Cannonball Adderley was the best ever. But you could certainly make a very strong case. 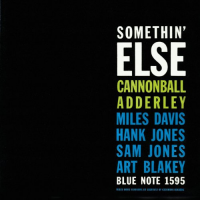 Is there anything new to say about a jazz classic that features one of the greatest two-horn tandems ever to lay down a blue note? How about this: You must own this record. Period.

I suspect that everyone with even a passing interest in jazz owns Miles Davis' Kind of Blue, the best-selling jazz record of all time. Well, Somethin' Else is Kind of Blue one year earlier. Same two horns—Davis on trumpet, Cannonball Adderley on alto—supported by a five-star rhythm section, with Hank Jones' piano, Sam Jones' bass and an unusually subdued Art Blakey on drums.

The original album had just five tunes, but each one is perfect.

This is a Miles Davis' album in everything but name. Sometimes muted and pensive, sometimes brash and boppy, Somethin' Else is the equal of anything Miles ever put on record. The opener, "Autumn Leaves," features Miles at his introspective, minimalist best. There are plenty of great records featuring muted Miles, but this is possibly my favorite. Close your eyes and try not to melt into the soft, bluesy horn. Adderley more than meets the challenge in his own understated way.

"Love for Sale" is another new take on an old standard, featuring more muted Miles. It starts slowly and elegantly, then turns to a scalding-hot boil—seven minutes of inspired improvisations.

And then it gets better. "Somethin' Else" lights the joint on fire. Davis and Adderley are absolutely spot-on in sync, trading call-and-response phrases as if they were conjoined twins. Was it planned? Was it made up on the spot? Doesn't matter. It's as if one person is alternating the two horns. This is jazz on a higher plane.

And then... stop, slow down, and change the mood. "One for Daddy-O" is a Nat Adderley original that is all smoke and smoldering noir. Finally, the original record ends with the ballad standard "Dancing in the Dark," with Adderley sounding like Charlie Parker reincarnated—sweeter than anything this side of Ben Webster.

The CD adds a final cut from the session, a Hank Jones original called "Bangoon." It's not bad—a fast bebop number that could have been lifted from a Parker-Gillespie record. It features a short and tasteful Blakey drum solo—the only one on this record—and then Somethin' Else is done.

Over a long and varied career, Miles Davis had plenty of great musical partners, so it's hard to say that Cannonball Adderley was the best ever. But based on Somethin' Else and Kind of Blue, you could certainly make a very strong case.