By Troy Collins
September 29, 2009
Sign in to view read count 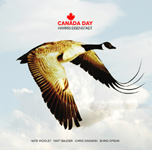 A consummate example of the traveling musician, Canadian-born composer/percussionist Harris Eisenstadt's journeys have taken him from a long-term residency on the West Coast (with frequent trips to Chicago) to multiple trips abroad to study drumming in West Africa before relocating to New York. The majority of Eisenstadt's releases have been documents of singular projects; ad-hoc ensembles that, despite their excellence, have never been given the time to properly develop. Canada Day is the self-titled debut album of the quintet he founded in 2005—the first time Eisenstadt has been able to record such a longstanding ensemble.

Drawing upon some of the best new talent in the Brooklyn scene, Eisenstadt's formidable quintet is as capable of adventurous timbral explorations as they are of in-the-pocket swing. Unswerving bassist Eivind Opsvik and vibraphonist Chris Dingman assist Eisenstadt in supporting the fervid front-line of tenor saxophonist Matt Bauder and trumpeter Nate Wooley. A magnanimous leader, Eisenstadt eschews unaccompanied soloing entirely on this date, leaving ample room for his sidemen, including his rhythm section partners. Dingman's effervescent cadences and Opsvik's melodious phrasing play pivotal roles in the group's evocative sound.

Blending a mid-'60s Blue Note vibe with elastic post-rock grooves and subtle West African influences, Eisenstadt successfully unites his assorted interests into a cohesive ensemble sound. Offering subtle variations on melody, harmony, rhythm and texture, he encapsulates the vastness of Canada in each piece, all dedicated to his native land. The moody "Halifax" unfolds as a slow rubato dirge, spotlighting Bauder's garrulous tenor eruptions, while Wooley's lyrical variations and Dingman's cascading accents infuse the cinematic tone poem "Every Day Is Canada Day" with ethereal plangency. Opsvik's melodious bass solo is the centerpiece of "And When To Come Back," with Dingman's ebullient spree elevating the jaunty opener, "Don't Gild The Lilly."

Bauder and Wooley are dynamic performers with a predilection for the outer realms of sound. Bauder's multiphonic glisses on "Halifax" and Wooley's coruscating half-valve smears on the angular "After An Outdoor Bath" push the limits of tonality without abandoning basic melody or harmony. Though no one musician dominates the proceedings, Wooley's muted discourse on "Don't Gild The Lilly" is a tour de force of controlled abstraction. An impressive master of textural manipulation, he joins Taylor Ho Bynum, Peter Evans and Rob Mazurek as another remarkable disciple of the legendary trumpeter Bill Dixon.

An accessible blend of inside and outside traditions delivered by an empathetic young ensemble, Canada Day is a welcome addition to the burgeoning discography of one of the new generation's leading composers.

Don't Gild the Lily; Halifax; After an Outdoor Bath; And When to Come Back; Keep Casting Rods; Kategeeper; Ups and Downs; Every Day is Canada Day.