Home » Jazz Articles » Nick Maclean: Can You Hear Me?

Nick Maclean: Can You Hear Me?

By Dan McClenaghan
December 22, 2021
Sign in to view read count 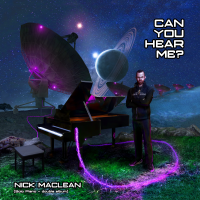 Pianist Nick Maclean plays in his comfort zones with his ensemble work in the funkified electric jazz group Snaggle, and in his New York City-style, Herbie Hancock-influenced modern jazz group, the Nick Maclean Quartet. But the solo format—at least in the recording studio—is new territory to him. Undaunted by the prospect, he offers up a double CD of solo piano music, Can You Hear Me?.

His influences are worn on his sleeve, starting with Herbie Hancock's "Dolphin Dance," a prancing, lighter-than-air take on the familiar tune from Hancock's classic 1966 Blue Note Records set Maiden Voyage. Bill Evans' pianism has also left an imprint, showing up on Maclean's version of "Some Day My Prince Will Come," covered by Evans when he worked for Miles Davis and later during his own solo career. Maclean's approach here is flexible and improvisational, getting a bit jaunty and exploratory about three-and-a-half minutes in.

A Wayne Shorter composition shows up ("Footprints"), and so does a Cole Porter ("All Of You') and a Mercer Ellington ("Things Ain't What They Used To Be"); Maclean pays his respects to poet Maya Angelou with his own composition, "Why the Caged Bird Sings," exhibiting a "defiant joy and celebration" in his musical interpretation of Angelou's writing and her personality. He presents eight more of his originals; all are strong, compelling tunes, played with finesse and feeling, and he tips a hat to Brad Mehldau, perhaps, and then Miles Davis and Keith Jarrett (again, perhaps) on his interpretation of the Lennon-McCartney composition "Blackbird," fitting the Beatles tune together with the classic "Bye Bye Blackbird," to create "Blackbirds."

The Maclean original "Circle Of Influence," covers a good deal of ground in its fourteen-plus minutes, from pensive ruminations to bright optimism to thundering McCoy Tyner-like chords, a highlight of a particularly fine solo piano outing.

And if his influences show, so does his own personal voice.

Dolphin Dance; All of You; Someday My Prince Will Come; Why the Caged Bird Sings; Difficulties of Discernment; Rational Discourse; It Could Happen To You; Circle of Influence; Estratagema feat. Brownman Ali; Blackbirds; Spartacus Love Theme / Nardis; Tell Me Something I Don't Know; Footprints; Things Ain't The Way They Used To Be; Variations On A Porkpie Hat; The Truth Of It; Message To My Unborn Child; Zion.