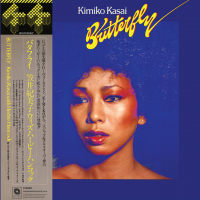 Reissues from Herbie Hancock's jazz-funk catalogue are always welcome, and few more so than Be With Records's vinyl-only edition of this long-neglected beauty. Recorded in Tokyo in 1979, it is comprised in the main of vocal versions of six Hancock originals and was singer Kimoko Kasai's fourth CBS-enabled collaboration with a leading US jazz musician—following Satin Doll with Gil Evans in 1972, In Person with Oliver Nelson in 1974 and Kimoko Is Here with Cedar Walton in 1975. The line-up includes Hancock on keyboards and synthesisers (and the era's signature vocoder), and the Headhunters's Bennie Maupin on saxophones, Paul Jackson on bass and Bill Summers on percussion.Butterfly was originally released in Japan only. In the less well-connected world of the late 1970s and early 1980s, this meant the album slipped unnoticed past most listeners in Europe and the US. But it is on radar now. And better late than never, for the performances are as classy as the set list. This is not revolutionary jazz-funk, as Hancock's own Head Hunters (CBS, 1973) was and Future Shock (CBS, 1983) would be. It is music with which to soothe a furrowed brow or two. There are elegant contributions from Hancock, Maupin on soprano and tenor saxophones and Webster Lewis on organ and acoustic piano. The trio float over sumptuous grooves laid down by Jackson, Summers, guitarist Ray Obiedo and drummer Alphonse Mouzon. Along with the Hancock originals, some with lyrics written by Hancock's sister Jean, the album includes Stevie Wonder's "As" and Graselli & Malanet's "Head In The Clouds." There is not one dud on the album. Highlights include the soulful title track and "Sunlight," the ballads "Maiden Voyage" and "Harvest Time," and Wonder's "As." Be With's remastered reissue includes a detailed replica of the original packaging, complete with OBI strip and four-page insert, and has been pressed on 180-gram vinyl.

Side One: I Thought It Was You; Tell Me A Bedtime Story; Head In The Clouds; Maiden Voyage. Side Two: Harvest Time; Sunlight; Butterfly; As.

About Kimoko Kasai with Herbie Hancock