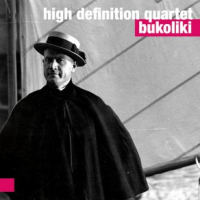 Surprises abound on Poland's For-Tune Records label, reminding us of this country's well-known and important legacy within modern jazz circles. On the heels of their widely acclaimed debut Hopasa (Emarcy, 2013), the High Definition Quartet strikes again with this superfine effort that substantiates its moniker with the crystal clear audio characteristics and the musicians' strict attention to detail.

The band abides by an egalitarian mindset and every composition stands on its own. Yet "V" closes out the album in mind-bending fashion. Bassist Alan Wykpisz kicks it off with booming notes, followed by Orzechowski's nimble tinkering, paving the way for a flurry of complex medium tempo unison phrasings with several bars of free-bop motifs and the frontline's hearty soloing escapades. Along with succinct harmonic treatments, the artists delve into a whirling series of events via contrapuntal mechanisms, terse exchanges and shifting paradigms. Towards the end, Sliwa and drummer Dawid Fortuna rough it up and tear the primary theme down to pieces. Thus, High Definition Quartet is one of the most resourceful and enterprising progressive jazz outfits I've heard in quite a while.