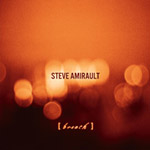 Steve Amirault has produced a fine piano trio album in Breath. He's not a tricky player, but his music brims with emotion; his melodies and style reflect a very personal means of expression with little that would be called straight-ahead jazz. Though Amirault clearly has the chops, his playing is not about showing off or using outlandish harmony. The mix of grand melodic, dynamic and textural gestures gives his music the feel of high theatrical drama—with much intensity, no harshness, and a glow surrounds the music as his left hand maintains a dense field of sound.

The album has two basic sections. The first four tracks aspire to grand themes ("Acceptance" and "Forgiveness," for example), while the remainder are thematically smaller vignettes that feel closer to standard jazz, but always with a deep personal stream running throughout.

While the opening "Breath" is short, it introduces Amirault's expressiveness and the fact that the music we are going to hear is anything but abstract. Made up of big, rolling chords and grand cymbal sweeps from Ritchie, it feels like an intro at a minute and a half, before it really gets going. "Acceptance" is a bit lighter, with Ritchie setting a light driving rhythm, supported by Vivian, over which Amirault begins what seems like an endless stream of ideas (along with some vocalisms). His one-of-a-kind playing veers in and out of the standard chromatic style as this eight-minute track flies by.

"Between Dreams" is a complete contrast, with long hanging chords decaying over stark rhythm accompaniment. This leads to the melody proper and the bass vamp that carries the tune. The tune is very emotional and direct, not at all superficial, arranged in a dramatic way using simple materials. The last song of the first section, "Forgiveness," feels quite connected to the prior tune, with a bit of the melody echoing, in faster time, the bass line heard earlier. Once again Amirault's deep font of ideas rolls ever-forward.

After those four intense tracks, "Je vois Clementine danser" is very refreshing, with a distinctly American West feel as we watch Clementine dance in 3/4 with a snare rim hit on the third beat and many more bluesy licks from the piano. "It'll Be OK" begins with a long melodic bass solo that, when joined by the piano and drums, creates a feeling of hope and happiness—and yes, that everything will be okay. The album ends appropriately with "At the End of the Day," which has its own mood of dusk and a combination of satisfaction with the efforts of the day and wariness of what the night will bring.

There is more than a bit of a poet in Amirault, and his music can easily be heard as tone poems, albeit multi-layered ones. His music wraps you in its embrace and carries you away.

Breath; Acceptance; Between Dreams; Forgiveness; Je vois Clementine danser; Society Intrigue; It'll Be OK; If We Believe In Love; At the End of the Day.