Boston Boy: Growing Up with Jazz 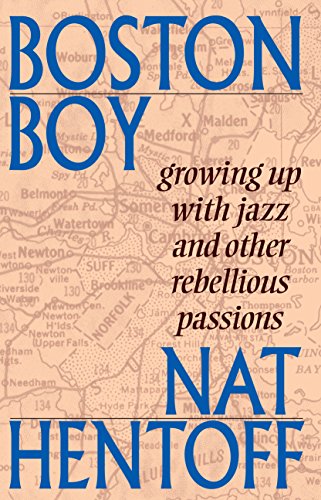 Boston Boy
Nat Hentoff
Paul Dry Books
ISBN: 096796752X
The concept of being "out there" is common in jazz parlance. It generally means breaking away from formal structure or tradition to discover something new. In essence, this is precisely what Nat Hentoff has spent his entire life trying to do. In his book, Boston Boy, he discusses his break from tradition by taking an in-depth look into his formative years.

Anyone who has ever explored jazz music is surely familiar Nat Hentoff. His work has been featured in Down Beat magazine, The Village Voice, and Jazz Times. He has also written several books and numerous album liner notes. Hentoff is undoubtedly a major figure in the jazz world. With Boston Boy, he explores more than his love for jazz music; he recognizes his desire to break away from convention.

Hentoff traces his desire to be unique from his earliest days of growing up in a Jewish neighborhood in Boston. As a youngster, he discovered himself at odds with certain aspects of his heritage. On one level, he embraced the Judaism of his ancestors, but on another, he tried as hard as he could to break free from it. In a sense, this is the essence of the jazz music he eventually grows to love: staying rooted in the foundation, but going out on a limb as often as possible. His dissension, though, was not simply a departure from Judaism. He rebelled more against oppression. He reviled the anti-semitic attitudes and activities of many Boston locals.

On the surface, Boston Boy deals as much with Judaism and politics as it does jazz. Of course, jazz is a major element here; however, like his own personal development, he assimilates jazz over a period of time.The book's style, reflects the progression in Hentoff's early life. It begins with many shorter sentences and sentence fragments. As the text progresses, though, the style becomes more developed and intricate. Jazz forms an undercurrent, which becomes more and more an essential part of his being.

In a certain aspect, Boston Boy is somewhat misleading. A reader expecting to find reminiscences of jazz greats throughout the book might be somewhat disappointed. While he does mention befriending many artists, such as Jo Jones and Paul Desmond, this isn't the primary focus here. Boston Boy isn't a "look who I've met," but a "look who I am" memoir. Most of the discussion about jazz comes in the latter half of the book, as he started working in radio and later in print.

Boston Boy has a great deal to offer. Hentoff is a master stylist, who has the ability to capture a reader's attention. With Boston Boy, the reader leaves with not only a better appreciation of music, but a deeper sense of human understanding as well.