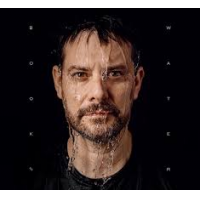 This CD marks the beginning of an ambitious project for guitarist Eric Hofbauer, five connected recordings based on the Chinese philosophical construct of the Five Agents, wood, fire, earth, metal and water. Each of these recordings is to have a different instrumental lineup, but for this first one, Book Of Water, he uses an explosive jazz sextet recorded in concert.

Apropos of the CD's title, this music flows continuously like water with only brief pauses between the five movements. On "Water Understands Civilization Well," Hofbauer's guitar trickles through a formidable three-horn front line of Jerry Sabatini on trumpet, Seth Meicht on tenor and Jeb Bishop on trombone that lurches and tumbles like a classic Ornette Coleman ensemble before giving way to an extended tenor soliloquy paced by guitar and a section of careening throb and tumble by the imposing rhythm duo of bassist Nate McBride and drummer Curt Newton. On "It Wets, It Chills," Hofbauer's soft, metallic strumming and harp-like plucks are gradually joined by softly muted trumpet. Then the rest of the band comes in with measured, solemn breaths while Sabatini's trumpet cries plaintively in the foreground. The piece remains at a quiet volume and eventually fades until just McBride's bass groans are left.

"It Is Not Disconcerted" begins in a free atmosphere of stalking guitar, bass and drum sounds. As that settles into choppy but regular pulses, Meicht breezes in, serenading a broad melody. The overall sound slowly becomes more intense and by the time Bishop's braying trombone kicks in, the rhythm section has morphed into a tarry, skeletal funk groove like a James Brown band in slow motion. "Well Used, Adorning Joy" starts with Hofbauer chipping out blowsy guitar figures, dripping notes off his fingers like raindrops, while McBride shadows him. The horns do a few slow wah-wah chords, then eventually McBride and Newton stir up a deep African groove. The horns repeat their phrase with increasing force and Hofbauer steps to the front, jangling and grinding an exotic vamp with the bass and drums.

"Ill Used, Will Elegantly Destroy" begins with giddy free scrambling by the guitar, trombone and bass that congeals into a regular rhythm. Then Bishop starts a dancing melody that turns into a triumphant, dizzying ride for the entire sextet. Sabatini's trumpet takes the lead and soars as Hofbauer invokes the "Take Five" rhythm. Eventually everyone takes heady, extended solos before everything ends with a climatic shout.

This is a thrilling ride that rolls, swirls and crashes like an elemental force. The horn players are exuberant, the rhythm section is buoyant and Hofbauer, whether carving out single notes like Derek Bailey or tossing off busy runs like Joe Morris, threads the music together. There is delicacy and power in equal measure on this excellent release, one of the best of the year so far.