By Mackenzie Horne
June 3, 2019
Sign in to view read count 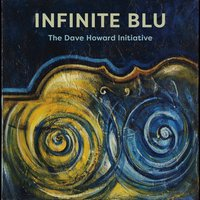 Guitarist Dave Howard was raised on a robust diet of jazz, classic rock, and the blues. He is the type of individual who stubbornly throws himself into the cross- genre deep end, ears first, and refuses to come up for air. Praying at the altar of fusion at midmorning, lunch at the Hard Rock Café, and paying dues to the electronic union, Howard lives a fulfilling life of musical extremes. These influences all converge in a space on The Dave Howard Initiative's Infinite Blu.

Infinite Blu is emblematic of Howard's diverse career as it currently stands, but more importantly, it provides a truthful blueprint of his ambitions. The Berklee educator looks to the future, one full of opportunities to shatter his academic mold. Listening to Infinite Blue, one gets the impression that Howard and his bandmates, bassist John DeBossu, Steve Gutherz on keys, saxophonist Jay Silva, and drummer George Correla are rebelliously breaking from tradition while simultaneously paying homage to it. Each musician is a formidable wielder of his instrument and together, they have created a project that makes one wonder why all ensembles don't come to the studio this prepared.

Howard yields to his yacht rock influences on the record's opening track, titled "Port Royal Dance." The tune has a George Benson-esque feel to it in the style of "Breezin.'" DeBossu and Corella set their standard right away; these two lock the entire record down, keeping it just tight enough for Howard to explore the space with childlike fearlessness. Gutherz and Silva compliment one another well on "Ida and Paolo," the pianist with his soft tone and the saxophonist with his bright, cutting sound.

"Ginseng" is the real highpoint of the record. Every musician is locked in with intention; nobody overplays. Howard and Silva play the head in unison, maintaining clean uniformity until Silva breaks off to solo. Gutherz's electric piano playing is a treasure, free of frills and full of substance. Corella's performance is immaculately clean and technical. From here, the group launches into the title track. DeBossu opts for upright bass on this particular track, and he puts down his best performance on the record. By the time the listener reaches "Three Day Week," one begins to wonder where on earth Howard found these guys.

Howard concludes the record with an original composition titled "Montepaone." The guitarist opts for minimalism, producing a gut-wrenching solo with few effects to get in the way. The devastating track is nostalgic, somewhere in the vein of trumpeter Chet Baker's "She Was Too Good to Me."

Infinite Blu covers a lot of ground. Describing the record as "cool" might sound like a lazy assessment, but Dave Howard is an incredibly cool musician. Simple, high-quality, and outright enjoyable, Infinite Blu showcases a group of people who know what they're doing. There's nothing fuzzy about this record, nothing to get in the way of the musicianship, and nothing left unturned. The Dave Howard Initiative has the unique ability to pull techniques from many sources and lexicons in ways that don't detract from expertise.