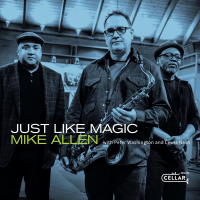 Mike Allen is another in an apparently never-ending line of talented saxophonists who seem to emerge, from time to time, from the Canadian provinces to ensnare the hearts and earn the admiration not only of their fellow countrymen but jazz enthusiasts in other climes as well. On Just Like Magic, Allen leads a deft and experienced trio whose other members are bassist Peter Washington and drummer Lewis Nash.

In a program that encompasses five of his original compositions, a pair of standards and four lesser-known but no less engaging themes, Allen delivers the sort of unblemished performance that leaves no cause for censure. Even so, one may find it difficult to single him out from a chorus of his peers. If a near kin had to be singled out for comparison's sake, it would probably be Joe Henderson, with whom Allen once studied. Fans of Henderson—and, no doubt, there are many—should weigh that as an indication of what to expect from Allen.

As noted, this is a saxophone trio, so there is no piano with which to enhance the melodic landscape. As that was Allen's idea, those who miss the added depth and color a piano can provide know where to aim their disapproval. Those who don't should be quite happy to embrace a trio of this caliber. As is true of Allen, Washington and Nash are both seasoned pros whose ardor and vigilance never waver. Given that underpinning, Allen is free to roam as freely as he wishes on his own serviceable themes, Duke Pearson's "Big Bertha," the ballad "A Weaver of Dreams," the Gershwin brothers' "Someone to Watch Over Me," John Coltrane's "Miles' Mode," Duke Ellington's "Solitude" and Charles Mingus' "Jelly Roll."

Just Like Magic is an astute and pleasing trio date, trimly recorded at the esteemed Van Gelder Studio in Englewood Cliffs, NJ.