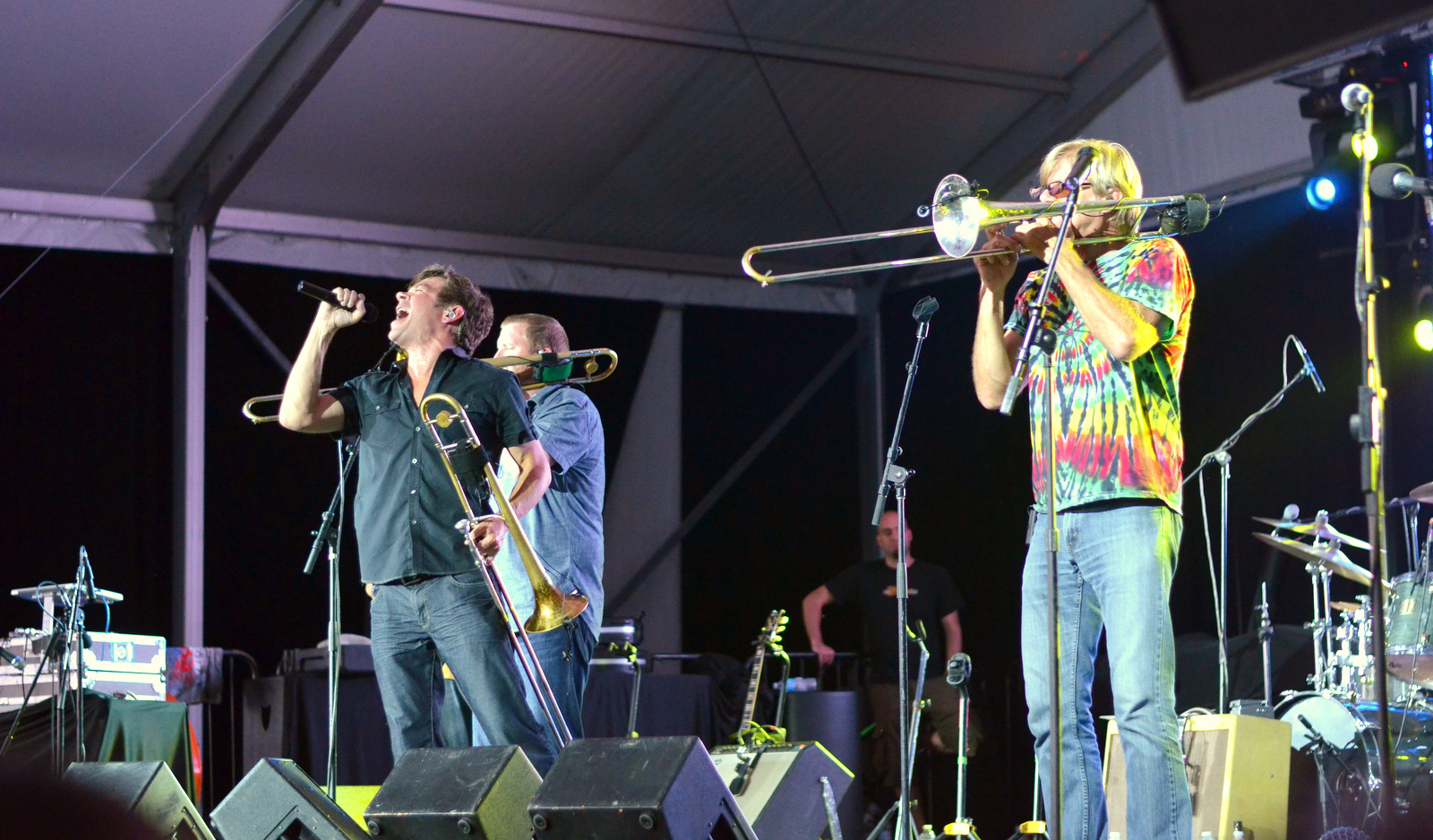 Laissez Les Bon Temps Rouler! Those who speak French know what the phrase means. If you have ever been to New Orleans, you've "lived" this phrase. If you've had the pleasure of seeing Bonerama in concert you can't help but scream the phrase at the top of your lungs. French or English. Either way, Let The Good Times Roll!.

Bonerama is a band. Yes it is, but that description is somewhat lacking. Bonerama is a brass/funk band. Closer, but still not quite right. Bonerama is a rock band with brass. That is an understatement, but it's still a bit off. Bonerama is one of the funkiest rock, soul, reggae, fusion, pop, jazz, brass, blues bands to ever come out of the Crescent City. Bonerama is a New Orleans institution.

Formed in 1998 by trombonists Mark Mullins and Craig Klein, Bonerama has added and subtracted band members with several prominent New Orleans musicians over the years (including Stanton Moore, Eric Bolivar, Matt Perrine, Charlie Wooten, Russell Batiste, the late Brian O'Neill, AJ Hall, Rick Trolsen, Eddie Christmas, Steve Suter and Charlie Kroger) either sitting-in for extended stays or as full-fledged members. Currently, Bonerama is for the most-part comprised of Mullins, Klein, Greg Hicks (trombone), guitarist Bert Cotton, drummer Alvin Ford, Jr. and bassist Nori Naraoka. Three trombones is an unusual format for a band with a rock 'n' roll edge. Horn-based instrumentation is not usually associated with songs such as the Edgar Winter Group's "Frankenstein," the Beatles' "Helter Skelter," Bruno Mars' "Locked Out of Heaven," Led Zeppelin's "The Ocean," as well as diverse covers of songs by Black Sabbath ("War Pigs"), Jimi Hendrix ("Crosstown Traffic"), the Allman Brothers Band ("Whipping Post") and so many more. The trombone (let alone three trombones) as the lead instrument in a rock band...it sounds different. It sounds like it might not work. But, boy it works...it really works!

Friday, June 27, 2014 was a warm, sunny beautiful day in New York City. Governors Island, a small former United States Army post (from 1783 to 1966) situated in New York Bay (only 800 yards from Manhattan) is accessible only via ferry service. On this night, the Governors Beach Club waterfront concert venue was home to the NolaFunk's 1st Annual Crawfish & Music Fest. And Bonerama was in the house!

Bonerama has to be seen to be fully appreciated and any Bonerama concert is a party of the first order. As the sun set across the bay on New York City, the band's live performance on the tiny island was a full blown musical onslaught. With a scenic view of the skyline in the background, audience members partied and danced in the sand to the funky grooves of this much loved New Orleans troupe. As the band's set unfolded, the thrilled audience began dancing on all areas of the beach club's grounds. Revelers could be seen dancing on the food lines waiting for their crawfish plates, at the bar on the sand between the blankets, toward the back in the picnic area and under the tent in front of the stage. The musicianship and joyous interplay between the band members was immediately evident. Klein, Mullins, and Hicks took their turns on vocals as Cotton's guitar smoothly blended with the three trombones and Naraoka's thumping bass and the driving New Orleans "street beat" syncopated backbeat. Ever the showman, Klein in a tie dye shirt and shades, rallied the crowd, making new fans and rewarding existing ones as he led the group in a sweat-soaked, high energy performance. Highlights included the Bonerama-ized version of the traditional Mardi Gras Indian chant/song "Indian Red," and the cover of Led Zeppelin's "When The Levee Breaks."

Though virtually everyone on the island was there because they were New Orleans music fans (and undoubtedly Bonerama fans), on the short boat ride back to Manhattan many of the faithful could be heard uttering their amazement and appreciation for the show.