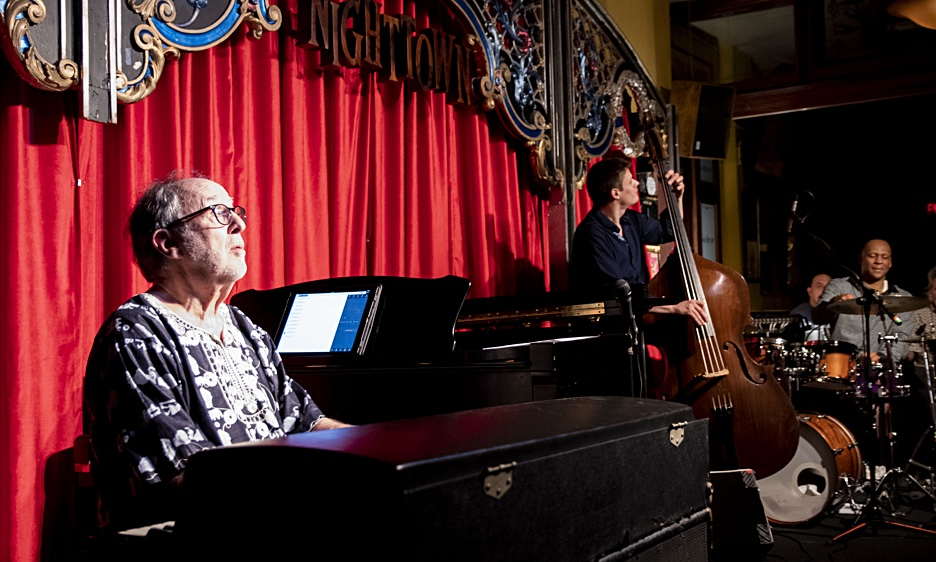 Although we keep hearing all the time that by sheer numbers the jazz audience is a small and select crowd, the fact remains that select musicians have crafted the type of following that guarantees crowd interest in all their latest endeavors. This type of pedigree has followed Bob James for many decades now and no doubt Cleveland's Nighttown was betting on the pianist's drawing power when they recently booked James and his trio for a three-day stand at the popular jazz spot.

With two shows each on Friday and Saturday evening as well as a Sunday night show, opening night brought out a packed house which spoke well to the kind of crowds the club would likely see over the course of the weekend. Utilizing the house's grand piano, James and company kicked off the second show on Friday evening with a swinging number that quickly introduced the audience to the pianist's partners in music. Both hailing from the Detroit-Windsor area, bassist Michael Palazzalo and drummer Ron Otis locked in with James for a great set of music spanning the decades and hitting on new material from the forthcoming Espresso album.

Without any delay, James turned to a pristine Fender Rhodes that the club had fortuitously scored at the last minute. Launching into "Feel Like Making Love," the crowd responded with audible approval as James spun chorus after chorus of inspired runs. A quick segue led to "Night Crawler" and one was immediately struck with how in-tune Otis's drumming was with Bob's lines and punctuations. Beyond clocking the groove perfectly, Otis' colorful drumming organically added additional layers to the music's textures and contours.

With a wry sense of humor, James discussed his culinary pleasures and his key to long days and extended tours—espresso. He explained how he loved it so much that he decided to use it as the title of his upcoming release. Named after a Korean dish, James then debuted "Bulgogi" and its complex and upbeat nature lived up to the title's literal meaning of "fire meat." Palazzalo dug in deep for a dazzling display of musicianship and creativity. Throughout the set, it was clear that James was inspired by the youngster's kinetic musical personality.

Giving the tired and overwrought Petula Clark number "Downtown" a major facelift, James ushered in his reworking via classical runs and motifs before settling into a lowdown groove that found Otis utilizing rim clicks on beats two and four. More updates were in order when James flipped the lid on "Mr. Magic," a Ralph MacDonald number that James arranged for a Grover Washington Jr. album of the same name. Boasting a perky Latin groove, there was plenty of space for solos from each trio member and James capped things off with a few oblique, Cecil Taylor-inspired runs.

Of more recent vintage, "Mind Games" gave way to the familiar "Westchester Lady," the latter number sounding reinvigorated in this all-acoustic setting. Not surprisingly, an enthusiastic audience insisted on an encore and the trio returned to the stage to find James seated again at the Rhodes for "Angela," the theme from Taxi. Like he had done throughout the set, James waxed eloquently over multiple choruses proving that the pianist is still at the top of his game in terms of creativity and story-telling. His astute choice of sidemen clearly had a lot to do with James' positive and engaged sense of mind.