Bob Dylan: A Year and a Day

By NENAD GEORGIEVSKI
June 4, 2016
Sign in to view read count 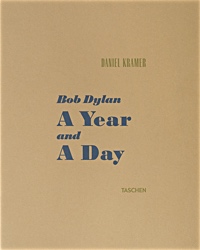 There is an intangible but powerful relationship between music and photography that can't be explained adequately with words. Music has often sought some form of association with the world of visual arts as often photographs can tell a story more articulately and can convey more meaning. Or they can convey more mystery. It is as if the grains carry within themselves long-gone atmospheres and meanings. In order to capture those moments, the photographer needs to recognize or sense them literally before they happen. Eventually, this exchange between the artist and the photographer can result in a trusting relationship where the artist, both on stage and off, can let his photographs be taken where both sides will benefit from those images.

Very few people have had the opportunity ever to get a foot into the inner circle of singer/songwriter Bob Dylan life and to take photographs of someone who is notorious for hiding his personal life. Photographer Daniel Kramer was one of those lucky and trustworthy photographers who were able to take photographs during arguably the most enthralling chapter of singer Bob Dylan's career. His photographs were collected in a book titled A Year and a Day which was initially published in 1967 with great success. Now, nearly forty years later and coinciding with Dylan's 75th birthday, Kramer is finally publishing again his extensive collection of images he captured of this much beloved and enigmatic figure. Reissued by the renowned publisher Taschen it is a real treasure trove features more photographs from Kramer's vaults where many are published here for the first time.

The photographs in the book span a period of one year and one day, dating from 1964-1965, a highly productive and combustive period for Dylan. It was a period when the culture was speeding up ahead and changing constantly at a relentless pace. Kramer had seen him performing "The Lonesome Death of Hattie Carroll" on a TV show in 1964 and, by his own admission, he didn't know who he was at the time. Prior to that Dylan had released four highly acclaimed folk albums and was heralded as a leader of a new consciousness. The period between 1964-1966 was a period of incredible creative spree when during this short time span he recorded three watershed records Bringing It All Back Home, Highway 61 Revisited and Blonde on Blonde. It was also a very combative period as during that time Dylan went to play electric guitar. This historic period has often been mined and explored by several documentaries by renowned directors such as D.A. Pennebaker and Martin Scorsese, countless books and several box sets from Dylan's Bootleg series, with the most recent Cutting Edge stretching over 18 discs.

Upon seeing Dylan on TV Kramer had found out who was his management and contacted them in order to arrange a portrait session with him. It took him 6 months of sending requests and when one day Dylan's manager Albert Grossman picked up the phone instead of a secretary, soon he was granted a one-hour session in Woodstock. These photographs provide a glimpse into Dylan's private life and how he spent his own time when not on the road or recording. Shot at manager Grossman's home there are photographs of Dylan playing chess or sitting on the porch or at other locations, where he can be seen playing pool. Upon seeing the results, then he was invited to travel with Dylan to a concert at Town Hall Philadelphia and in the next year and a day he will take fantastic photographs of Dylan on various occasions.

Here Kramer is able to create a truly unique and at moments intimate portrait of one of the most enigmatic figures from different angles. As a result, he produces dazzling pictures of this musician who is pictured here both on stage and off and working in the studio. On stage, he freezes moments of live performances either solo or in duet with singer Joan Baez or with the Hawks. Kramer's photographs also adorn two album covers from this period, Bring it On Home Highway 61 Revisited and later Biograph. His photographs can also be found in the booklet of Bootlegs Vol. 12 Cutting Edge. There are all kinds of moments to admire that are captured by these photographs: the ones with Johnny Cash, backstage with Joan Baez, with poet Allan Ginsberg or the Bring it all Back recording sessions.

In recent years, it seems like there has been no shortage of books to emerge about Bob Dylan. Undoubtedly, he is a towering figure which powerful influence pervades many genres and continues to inspire even today. Kramer's photographs that are gathered in this book have helped define an era and shaped rock mythology. What they really do is capture the intangible and the unexplainable. They are witnesses to a period when his music and lyrics have changed the course of music. As such they are of colossal cultural importance.