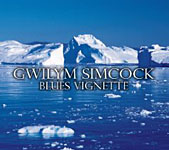 Around long enough that the phrase "coming late to jazz" is no longer relevant, pianist Gwilym Simcock's star has been rapidly rising on the British scene for the past seven years, as he continues to mine the nexus of a classical upbringing with his more recent "conversion" to jazz. All too often, young artists release albums as leaders before they're ready, but in the case of the still twenty-something Simcock—a member of saxophonist Tim Garland's innovative Lighthouse Trio responsible for the superb Libra (Global Mix, 2009)—Perception (Basho, 2007) was a fully realized debut that highlighted his skills as performer, composer, and bandleader.

Blues Vignette aims for even more ambitious territory; a double-disc set featuring the continually-evolving pianist solo, in trio with bassist Yuri Goloubev and drummer James Maddren, and in duet with cellist Cara Berridge, a member of the six-piece Sacconi Strings heard with Simcock, Garland, and bassist Malcolm Creese on Acoustic Triangle's 3 Dimensions (Audio-B, 2008). The result is an eclectic set that more vividly demonstrates the true breadth of Simcock's range, with largely original music ranging from the overt classicism of his two-part "Suite for Cello and Piano" and a decidedly swinging albeit knottily arranged look at George Gershwin's "Nice Work If You Can Get It," to a propulsive and free-wheeling solo version of the Barry Mann/Cynthia Weil classic, "On Broadway," and three improvised miniatures that position Simcock as a young Keith Jarrett in- the-making.

It may be bold to compare Simcock with Jarrett, but it's apt. He plays nothing like the iconic pianist, but draws from equally broad sources when he improvises, creating music that's neither jazz nor classical by conventional definition, but liberally blends aesthetic choices from both. Simcock may, over the course of the 50-minute solo performance that opens the first CD, still be searching for his voice, but it's clearly emerging on tracks like "Exploration on Mvt II of Grieg Piano Concerto," where the pianist's avoidance of "look at me" gymnastics and allegiance to the power of nuance makes for a compelling example of slow, subtle, and gradual majesty.

Simcock's growth as a composer has been running in parallel with his rapid trajectory as a player, with "Suite for Cello and Piano"—a through-composed, 21-minute work of colorful impressionism and direct lyricism—again emphasizing substance over style, despite impressive performances by both Simcock and Berridge.

Every segment of Blues Vignette shines individually, but the trio music on the second disc demonstrates, perhaps, the most palpable growth over Perception if only because, instrumentally-speaking, it's the most directly comparable. On the simmering intensity of Simcock's "Tundra," Simcock, Goloubev, and Maddren demonstrate the same empathic, unfettered interaction that can be heard in contemporary trios by pianists John Taylor, Bobo Stenson, Brad Mehldau, and, of course, Jarrett. Simcock's sponge-like ability to assimilate new ideas into a cogent voice makes him an easy partner with every one of these significant pianists. A major statement that spotlights his multifaceted interests with pristine clarity, on Blues Vignette, Gwilym Simcock has arrived.