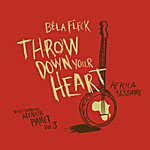 An exemplary adventure in cross-cultural music making, banjoist Béla Fleck's Throw Down Your Heart deserves every bit of hyperbole that is going to be thrown at it. The third volume in Fleck's Tales From The Acoustic Planet series, it's subtitled "Africa Sessions" and finds him in East and West Africa, mostly on field recordings or in improvised studios, playing with musicians from Mali, Madagascar, Tanzania, Uganda, Senegal, South Africa, Cameroon and Gambia. It's simply sublime.

Though the cast includes international stars—singers Oumou Sangare and Baaba Maal, kora player Toumani Diabate, n'goni player Bassekou Kouyate—most of the musicians are unknown outside their own countries, let alone outside Africa. But Fleck chose his collaborators well, and the album's 73-minute playing time is close packed with virtuosity and invention.

To make it, Fleck had to put his money where his mouth was. In the late fall of 2004, Sony, who had been negotiating to release the album, looked at the budget and pulled out. Plans for the trip—taking in six weeks of auditioning and recording, and including in the entourage filmmaker Sascha Paladino (Fleck's brother) and ace Nashville studio engineer Dave Sinko—were well advanced. Fleck decided to self-finance and the trip took place, as scheduled, late January through early March of 2005.

Albums bringing American and African musicians together aren't new, but Throw Down Your Heart is a uniquely successful one. Its roots lie not in singer Paul Simon's Graceland (Warner Bros, 1986), but in John Lomax's field recordings in American blues country in the 1930s—this time with the musicologist participating in the music.

The banjo, of course, is essentially an African instrument, created in the US by slaves taken from Africa—its blueprint is still alive and well in 2009 in Gambia, where it's known as the akonting—and its percussive, "dirty" tonality is wholly at one with African acoustic roots music. Any doubts about the instrument's origins are dispelled on "Ajula/Mbamba," on which Fleck jams with a Gambian akonting group. Here, as throughout the album, the banjo fits like a glove.

Most of the 17 tracks are jams, and that's one of the album's strengths. To call the performances "collaborations" suggests a degree of preplanning which wasn't at work. Instead Fleck pitched up somewhere, checked out the local talent, set up the mikes and played, mostly using local material (the title track is the sole Fleck-only composition). Along the way, especially in East Africa, he meets styles and instruments little-known even in world music circles; three tracks with Ugandan and Tanzanian lyre players are amongst the ear-opening delights.

But every track is a gem. Throw Down Your Heart is a masterpiece not to be missed.