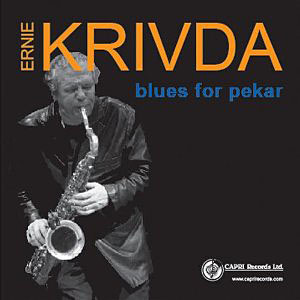 On Blues for Pekar, Cleveland saxophonist Ernie Krivda pays tribute, not only to the late writer, critic and jazz aficionado Harvey Pekar, but also to the time and place from which both men hailed. Working with the Detroit Connection rhythm section also featured on the saxophonist's Live at the Dirty Dog (CIMPoL, 2010), Krivda swings mightily through a set of bebop standards and originals that skip, sing and warmly sway to the pulsing beat of the rust belt in its mid-20th century heyday. The music, in fact, has a spring to its step, even on the ballads, that seems a touch at odds with the grumbling, down-in-the-mouth Pekar persona made famous by the writer's American Splendor comics. But the music's vibrancy is duly fleshed with bluesy, melodic heft that keeps it from ever becoming flighty.

As ever, Krivda favors long—ever so long—spiraling lines that weave in and out of a tune's scripted framework, flashing by turns the polished chrome of a standard's communal lyricism and the barreling weight of Krivda's own athletic insistence. His tone throughout is deep, wide, strong and full, commandeering the surge through an equally dense and enveloping field loosed by bassist Marion Hayden and drummer Renell Gonsalves, and captured to wonderful, old-school effect by engineer/producer Michael Seifert of Cleveland's Ante Up Audio.

Pianist Claude Black adds a bright, at times too springy piano to the affair (although his solo on the wide-awake "Darn That Dream" is spot-on), while trumpeters Sean Jones and Dominick Farinacci, both native Clevelanders and former Krivda pupils, each lend the sear of brass to a pair of tunes. Protocol on these numbers (Farinacci on the title track and "The End of a Love Affair"; Jones on Sonny Rollins' "Valse Hot" and Dexter Gordon's "Fried Bananas") is for sax and trumpet each to take a solo, and then come together down the home stretch—Farinacci's punctuated lyricism and Jones' relaxed swing both proving easy partners to Krivda's roiling bop.

Not only do the album's five standards serve as fertile bop soloing ground for Krivda and his mates, they also allow the saxophonist some arranging fun. "Love Affair" charges out of the gate in a rollicking exuberance far removed from the ballad's common moody rendering. Likewise, "Darn That Dream" is alive with expectant thought, while "More Than You Know" moves from Krivda's comically swaying, drunken horn into music which is alert and buzzing (with love, no doubt).

Still, it's the two Krivda originals at the album's close that give the work a relevance beyond the joyful and inventive. "One for Willie" pays homage to legendary Cleveland arranger and saxophonist Willie Smith, and contains, at its heart, a wonderfully conversational solo from Hayden. "Blues for Pekar" closes the set, the brash, harmonized theme from Krivda and Farinacci leading into soloing bluesy and swinging enough to carry any cartoon Pekar down the street in a proud, if curmudgeonly lope. The jazz is straight-ahead, the scene is down-and-out, the joy is in the moment.