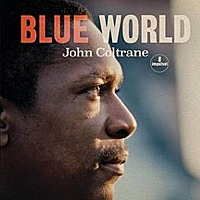 Discovering old and forgotten audio tapes of a jazz icon like John Coltrane is always exciting, but their posthumous release can have mixed motives. Taking advantage of the musician's name to make money is less salutary than, say, providing more great music for the public or providing opportunities for enthusiasts and scholars to fill in gaps and trace the musician's progress. Always in the background is the question of whether the musician would have permitted their release if he or she were still alive.

In 2018, the Impulse label released a CD of a 1963 recording date of the classic John Coltrane Quartet (Coltrane, McCoy Tyner, Jimmy Garrison and Elvin Jones) made at Rudy Van Gelder's famed studio. Coltane's son, saxophonist Ravi Coltrane, discovered the tapes and, since they incorporated Coltrane's development from his hard-bop phase to the newer spiritual and avant-garde qualities that would develop thereafter, he called the album Both Directions at Once. It's not known why the tapes had been originally shelved, but they clearly make for a high-level recording with the quartet doing fine performances of interesting tunes; some, like "Impressions" and "Nature Boy," familiar, some not. It was a solid record date, and unfortunately some great ones are regrettably never released. So this was a blessing.

In September, 2019, Impulse is releasing another discovery, this one surprisingly unearthed at the Canadian Film Board. It's the product of an afternoon's work at the Van Gelder studio of tracks Coltrane's quartet recorded on a June 24, 1964 in a session requested specifically by Quebec filmmaker Gilles Groulx. Groulx, with the intercession of Garrison, asked Coltrane to supply background music for his film, Le Chat Dans Le Sac, a movie examining the social and political issues in French Quebec. The music was never intended for a record album, rather meant to provide background music to a film. In fact, it was never logged as a recording session by Van Gelder. Thus, there is a legitimate question of whether Coltrane would have wanted to see these quickly conceived tracks available to the public as an audio disc.

It's true that the recording does have virtues. There are some wonderful passages, and aficianados will be listening for what's old and new in the improvisations, since it consists of previously recorded songs re-done in between the sessions for Crescent (Impulse!, 1964) and A Love Supreme (Impulse!, 1965) at a time when Coltrane was clearly moving into new forms and concepts. The tunes, most likely selected in a discussion between Groulx and Coltrane, include "Naima," "Village Blues," "Like Sonny," "Traneing In" and a contrafact of "Out of This World" which became the title track, "Blue World."

For the session, Groulx met the quartet at Van Gelder's studio, there was some conversation, and the group recorded him a mono tape of some good background music for his film. This was not a well-planned creative project like Miles Davis' soundtrack for Louis Malle's Ascenseur Pour L'échafaud where Davis, at his specific request, improvised while he was observing the film in a special studio assembled for the purpose. Coltrane and his cohorts simply tried to deliver some good takes for a film they had never seen and about which they had only a vague concept. Some of the music does have a kind of "film noir" feel to it. The tracks are all less than 8 minutes each, not so different from many of Coltrane's recordings. But Coltrane improvised for 13 minutes on his popular hit, "My Favorite Things," and almost endlessly on some live gigs. On this record, you get a sense that he's just winding up for the pitch.

The album begins with a fine rendition of "Naima" (Take 1). Coltrane's tenor saxophone sound is at its best. Tyner seems to try to create a casual light film feeling, while Jones pushes for more complexity, and then the melody is re-stated simply and sweetly. "Village Blues" (Take 2) begins with Tyner's piano intro and the melody is then stated by Trane. The piece builds in intensity, but there is not much of musical interest here.

"Blue World," the previously mentioned contrafact of "Out of this World," is introduced by Garrison's two string harmonized motif. Tyner comes in to highlight the bluesy rhythm. Here, Coltrane gets more intense than in other tracks, and his inventive brilliance comes through. Coltrane enthusiasts will love listening to and studying this one. It has the full energetic impact of the classic quartet.

"Village Blues (Take 1)" is a bit more interesting than the second take. At one point, Coltrane explores harmonic changes like he did in "Giant Steps" years earlier. "Village Blues (Take 3)" is a minimalist version without much to say for it. "Like Sonny" jumps and swings, in a very lively take that is a close facsimile to the earlier versions by Coltrane. It captures the interest of the listener from beginning to end.

"Traneing In" may be the most musically interesting tune in the set. There are extensive solo choruses by Garrison. Then Tyner and Jones enter to give swing to the piece. Coltrane really wails here, and you can hear traces of the new course he was taking with Crescent and A Love Supreme. You feel that he could extend this into a rich sequence of improvisations. The final track, the second take of "Naima," is not as good as the first take. It comes across at the outset as labored and mechanical. But it does eventually capture some of the wonderful romantic feeling the group achieved on the classic Johnny Hartman album a year prior (John Coltrane and Johnny Hartman, Impulse, 1963). The tune does have lyrics, although singer Karrin Allyson recorded a fine vocal version of it without words (Ballads: Remembering John Coltrane, Concord, 2001). "Naima" is an example of Coltrane's intimate connection between his instrument and the human voice. You really get some snapshots of that special quality here.

It's the reader's call whether such an album should be released. The one great thing about it is that it keeps the jazz world attuned to all that Coltrane has to offer. According to his biographer Ben Ratliff, Verve (Impulse!'s parent company) has eighty-six CDs worth of Coltrane's concert recordings. At the current pace, they could release one every year for the rest of the century and beyond. Whether that turns out to be creative foment or crass commercialism remains to be judged by what is chosen and what we hear.