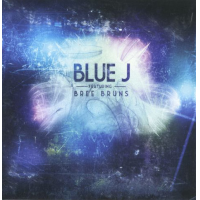 Formed in 2007 as a power trio with guitar, bass and drums, Blue J has evolved into a dynamic combo that smoothly brings in piano, Hammond, tenor saxophone and trumpet, as well as Bree Bruns' convincingly versatile vocals. With a colorful cover that anticipates the musical blend, this debut album presents an appealing combination of vocal and instrumental tunes that flows through different styles ranging from updated, joyous swing and rhythm & blues to intimate standard-like pop numbers. Along the 10-track trip, Josh Espinoza's compositions offer the listener an eclectic soundscape with a common approach: adaptability and interplay with style frameworks, and inspired improvisations by the musicians.

The album opens up with "I Want To Take You There," an energetic, catchy tune with a modern feel. With his bluesy-Latin piano playing, Shawn Ellison keeps the song moving while Bruns shines at her best. Her impressive delivery reaches its peak in the last part of the song, where she combines class and power, playing with her voice like a soloist. "I See The Rain" brings it down with an arranged theme that announces wonderful solos by tenor saxophonist Ponder East and trumpeter Shane Pitsch. Before the tune closes off with the theme, it is the turn of an interestingly evolving dialogue between Espinoza's emotional bass and Jim Collard's attentive guitar licks and precise playing.

The music continues with "Never Fade Away," a relaxed bossa nova-influenced ballad that serves as a transition to what might be considered the album's key tune, "Austin Renaissance." Taken as some kind of tacitly accepted group declaration, it can arguably be interpreted as suggestive of some kind of liberating statement, for instance, about the group, Austin and its relationship with jazz culture. A steady-pulse hard bop tune with moving solos, "Austin Renaissance" could also embody the group's signature song if, despite breaking the average length of the tracks, it summed up all the voices in the band. In this sense, the addition of tenor saxophone, guitar and voice (as an instrument) could make a more representative group-defining expression.

Instead of pouring everything along a single path, Blue J keeps several music lines throughout the record, where musicians naturally come in and out. "Look At The Sky," the following vocal tune, introduces the Hammond sound and echoes "I Want To Take You There" for its catchy chorus and soulful energy. "Siempre Adelante" and "Sharona's Shuffle's" improvisation investment line up with "Austin Renaissance," exploring the confident merging of blues-based jazz with Latin strokes and refreshing turns. The sweet side of the album stretches out with "Lost 10," an introspective guitar tune, and "I Believe In Love," a happily naïve song about love connected to the jazz standards tradition. The album concludes with "Consider It Over," a mellow cut that confirms the band's searching attitude within tradition.

Overall, Blue J featuring Bree Bruns is a remarkable debut album by experienced musicians. It is not only capable of satisfying and moving different audiences, but also stirs up in concert and future recordings expectations. Solid evidence of Austin's jazz richness, the album projects the tasty, cool flavor of a band whose development will be well worth monitoring.

Tracks: I Want To Take You There; I See The Rain; Never Fade Away; Austin Renaissance; Look At The Sky; Lost 10; Siempre Adelante; I Believe In Love; Sharona's Shuffle; Consider It Over.

I Want To Take You There; I See The Rain; Never Fade Away; Austin Renaissance; Look At The Sky; Lost 10; Siempre Adelante; I Believe In Love; Sharona’s Shuffle; Consider It Over.