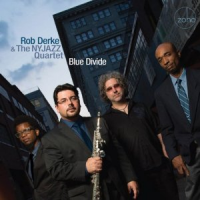 The name "NYJAZZ Quartet" does beg the question, "What is New York Jazz?" Even narrowing the definition to "home grown" music doesn't help, since that range runs from the mainstream sounds of Birdland and the Blue Note to the next-level avant-garde associated with Smalls and the late lamented Knitting Factory. With Blue Divide, saxman Rob Derke and his three extraordinary partners —pianist Aruán Ortiz, bassist Carlo De Rosa, and drummer Eric McPherson—have managed to mash those two contrary sub-genres into a galvanizing set that bends the outside of the box without breaking it.

In more ways than one, "Prelude" is an extremely appropriate title for the opening track. The piece seems to be a fairly standard meditation: De Rosa plays searching figures under Derke's mantra-like soprano sax, MacPherson's drum-taps sound like someone's hammering nails in a faraway apartment, and Ortiz' fills and figures recall the non-linear lines he's drawn on his own recordings. Far from being just your basic rubato playground, "Prelude" lets the group establish its own musical language, as the meditation becomes conversation and the kindred spirits come together.

Derke's "mantra" is actually the melody line for De Rosa's bopping waltz "Pasillo Azual," which the group slides into without missing a beat. As McPherson takes his customary perch out on the edges, the bassist's foundation lines jump about as Ortiz attacks the piece with his customary cockeyed brilliance. Normally Ortiz is the ringleader on boundary-stretching works like this, but instead he's just one cog in this extraordinarily ingenious machine, and Derke's own contributions (both instrumental and compositional) match Ortiz' for inventiveness and energy.

"Davey's Dreams" is a straight-up blues that recalls early Miles Davis, but Derke's solo lines are anything but straight up, and Ortiz is essentially the anti- Bill Evans even as McPherson channels his inner Jimmy Cobb. Both the pulsing "Dispossession" and the chaotic closer "Taksim" show how Derke was affected by his time in the tumultuous Middle East, while "G's Waltz" combines Derke's love for his daughter Gabriella with his fears about the world she's growing up in; the resulting image is a father-of-the-bride dancing with his daughter while the wedding reception is falling to pieces and zombies are pounding on the windows.

Believe it or not, there are moments of relative calm on Divide: De Rosa's warm "Knowing" paints a picture of an "Ah hah!" moment and the feeling of accomplishment that should come with it. For Herbie Hancock's "Still Time," Ortiz eschews his default deconstruction mode in favor of a marvelous elegance that shows the obvious respect he holds for the piece's iconic composer. Derke's own solo echoes the romantic side of John Coltrane, and the piece is a welcome rest before the onslaught of "Taksim" takes hold.

Blue Divide will be a tough call for purists of both the mainstream and the avant- garde, because it doesn't "commit" to either mindset. Instead, Derke and his partners have walked that fine line between both schools like a high wire at the circus, with outstanding results.