Black Motor with Verneri Pohjola at the 2013 Flow Festival 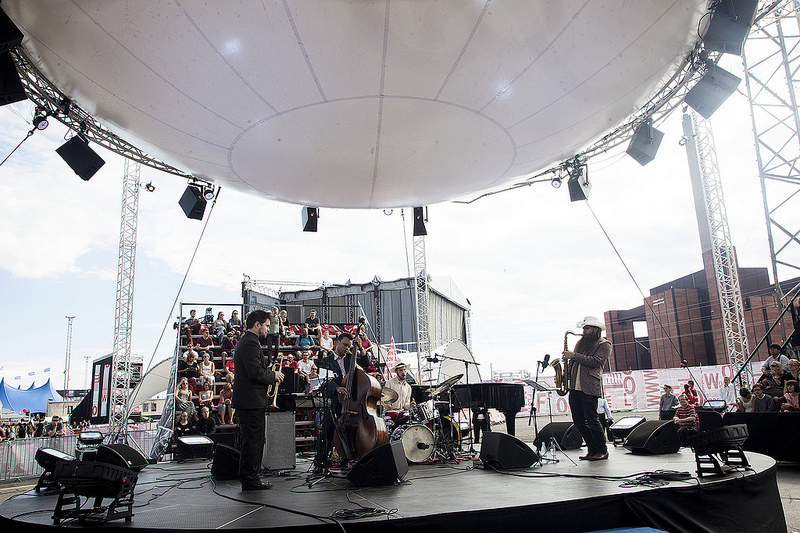 On the last day of the summer holidays, and under what's typical seasonally unpredictable weather, a large crowd gathered in downtown Helsinki for Scandinavia's urban music event, Flow Festival. Black Motor Trio began its set with a tunes featuring its usual bravado and panache, ably abetted by Finland's decorated trumpeter, Verneri Pohjola. This was the same lineup as on its recent release Rubidium (TUM records, 2012), where the band successfully interwove Pohjola's more melodic pieces with its usual free jazz repertoire. The band frequently invites guests to perform and has included many of the country's leading jazz artists, most recently guitarist Raoul Björkenheim, as well as, in 2012, Peter Brötzmann. And Pohjola's background is equally eclectic, having worked with the nationally renowned big band UMO, and playing a prominent part in this country's most successful nu-jazz outfits, Quintessence, the Ilmiliekki Quartet and his own Quintet.

Utilizing a 360° outdoor circular stage, the band played directly under a large white balloon tethered beneath the site's iconic two towering brick chimneys. With an assorted audience of Sunday afternoon revelers all around them, the two solo instrumentalists faced each other at the front of the stage. Sami Sippola's saxophone style reflected his own appearance: long straggly hair and beard, beaded cowboy hat and boots, and an instrument that hasn't seen any polish since it left the factory. He blew long solos, often extricating choruses of overblown notes that bounced from the lower registers, up and back, straining to keep within the bounds of musical sound. By contrast, Pohjola, in dark jacket and tightened tie, parried and interjected or alternatively accompanied the sax's rasping runs with his own crisper trumpet lines. In contrast with his other, more melodic partnerships, Pohjola seemed to relish the chance to cut and oppose Sippola's own angular style.

Behind the two leading soloists, drummer Simo Laihonen and acoustic bassist Ville Rauhala both put in stalwart performances. Laihonen and his Tampere-based colleagues go out of their way to make music that is out of the ordinary, but still more or less accessible. When the groove takes them it can be wild, but many compositions here were surprisingly mellow, often even melancholy. Pohjola played their foil, either looking across the stage towards Sippola's more demonic solos, or taking flight himself in some choicely elegant trumpetry.

In addition to main acts like Alicia Keys, Kraftwerk and Public Enemy, the Flow Festival is increasingly including a range of local jazz lineups in addition to larger names like this year's Ravi Coltrane. Black Motor fitted very successfully the festival's extension of its original underground image—which, after 10 years of steady growth now encompasses almost all musical tastes. That said, this band certainly does not, and did not, play lazy Sunday afternoon music.