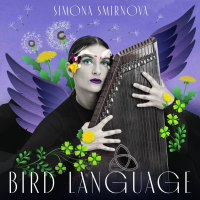 Simona Smirnova is a Lithuanian-born and New York-based vocalist, composer, and classically trained kanklės (a Lithuanian chordophone folk instrument belonging to the Baltic zither family) virtuoso. After obtaining her BA in jazz vocal performance from the Lithuanian Academy of Music and Theater, she moved to the USA to study contemporary writing and production at Berklee College of Music.

There is an aura of mystique to Smirnova's Bird Language, a stunning blend of Baltic folklore, jazz, pop, and rock, infused with nature- themed sounds. The album was brought to life through the ethereal sound of Lithuanian kanklės, Smirnova's virtuosic, sultry signature vocals, and mimicked bird shrieks, interpolated with jazz piano-driven solos, and sinuous, enticing arrangements.

Bird Language conveys Smirnova's numerous life experiences and influences, fundamental to her voyage of self-revelation. As the title indicates, Bird Language draws from the artist's love and profound connection to the natural world, which plays a pivotal role throughout the entire album. Bird Language is nature themed and offers an aural and emotional exploration of humanity's relationship to nature and with one another, delivered with hypnotic vocals, celestial sound of kanklės, and exquisite, Eastern European-hued piano sections.

Bird Language opens with the breezy, soaring vocalizations of the title track, flourishing into an experimental jazz piece built on exotica- styled kanklės and syncopated rhythms. "Volcano Dreams" delves into the various ways humans are connected. The string section brilliantly enhances Smirnova's vocals on "Out of the Ashes," which explores the urgency of returning to self. Next up, the rhythmic, dynamic "Dandelion Time" celebrates the arrival of springtime and the rebirth of life. Inspired by the artist's childhood in Lithuania, "Solstice"— a hymn to the summer solstice and the traditional festivals— includes harmonies from the Lithuanian multipart midsummer solstice folk song "Kupolio Rožė." The warm tones of the saxophone and the fluttering vocalizations of "Intuition" capture the affinity between instrumental music and human intuition. Perhaps the most avant-garde composition on the album, "Secrets" offers some of the finest vocal moments, soaring to the highest heights. The emotionally charged "Rūta Žalioji" closes the contemplative journey.