BY GLENN ASTARITA
November 1, 2001
Sign in to view read count 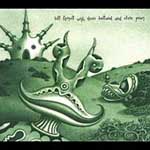 The mere fact that legendary drummer, Elvin Jones, and bassist Dave Holland are backing guitarist, Bill Frisell makes for an interesting proposition. However, those familiar with Jones and Holland should be aware of their respective faculties as artists who have performed with the creme de al creme of jazz, as their resumes and legacies are well documented. With this release, the rhythm sections' charter is seemingly fabricated upon delving into the leader's musical mindset, and highly individualistic style.

On the opener "Outlaws," the trio revels in a lightly swinging, blues based romp based upon the guitarist's multi-tracked acoustic/electric guitar performances. Here, Jones maintains a vibrant yet unobtrusive straight four pulse, while Holland solos and Frisell cranks the volume of his electric a few notches towards the finale. "Coffaro's Theme" is a pleasant C&W, homespun piece, featuring Frisell's now infamous idiosyncratic phraseology. Whereas, the band pursues country blues style themes amid Frisell's quite alluring, acoustic guitar-based spin on Henry Mancini's classic, "Moon River."

The musicians provide a slightly temperate song mix yet Jones displays his polyrhythmic fury during the beginning of "Again," although Frisell alters the direction with haunting lines via his sustained notes, loops, harmonics and well-placed crunch chords. Hence, this is a fine recording, even though many of the guitarist's loyal fans may be surmising when he is going to step out of the somewhat gentile curriculum witnessed in the recent past.