By John Kelman
February 1, 2016
Sign in to view read count 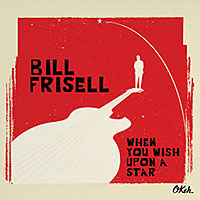 While jazz and interpretation are hardly strange bedfellows, few musicians have managed to be both as deeply reverent to his source music and profoundly personal and in his approach as guitarist Bill Frisell. That's not to suggest his re-imaginings of other composers' works have been anything remotely approaching predictable; as early as his first "covers" record, Have a Little Faith (Elektra/Nonesuch, 1993), Frisell managed to create a congruent program out of disparate sources ranging from Aaron Copland, John Phillip Sousa and Charles Ives to Sonny Rollins, Muddy Waters, Madonna, John Hiatt and Bob Dylan. Subsequent albums, like All We Are Saying... (Savoy Jazz, 2011), may have been far more focused in their source material but, as Frisell demonstrated when he brought that John Lennon tribute music to the 2012 TD Ottawa Jazz Festival, he possesses a rare ability to truly get to the heart of the music while still imbuing it with his often idiosyncratic musical dispositions...and an ever-unabashed love of all music that has made him one of the most important guitarists and conceptualists of his generation...in any genre.

Frisell also has an uncanny knack for putting together unusually configured groups, and while When You Wish Upon a Star is relatively straightforward, it remains the kind of group that only the guitarist would choose to pay tribute to film scores from Bernard Hermann, Ennio Morricone, Nina Rota, David Raskin and Elmer Bernstein, along with songs from films including 1965's The Sandpipers ("The Shadow of Your Smile"), the title track to the 1967 James Bond film You Only Live Twice, Disney's 1940 animated film Pinocchio ("When You Wish Upon a Star"), and the theme song to the radio and television show, The Roy Rogers Show, of the 1940s/50s ("Happy Trails"). A heartfelt recording that follows his similarly nostalgic look at the music he grew up with in the 1950s and '60s, Guitar in the Space Age (Okeh, 2014), When You Wish Upon a Star not only pays tribute to the films (and television shows) and their music, but to the musicians who were instrumental in bringing the original music to life: musicians like Dick Nash, Bob Bain, Dennis Budmir, Gene "Clip" Cipriano and countless others who toiled, largely in obscurity, with little or no credit.

When You Wish Upon a Star's quintet is anchored by a "proper" rhythm section featuring now-longtime Frisell mate, drummer Rudy Royston, and bassist Thomas Morgan—making his first appearance on a Frisell recording but far from a stranger to the guitarist, the pair having collaborated on two of Danish guitarist Jakob Bro's wonderful Loveland Records trilogy, specifically 2011's Time and 2013's December Song (the trilogy completed by 2009's Balladeering, where the bassist was Ben Street). But it's the addition of another longtime Frisell collaborator, violist Eyvind Kang, whose relationship with the guitarist now stretches back 20 years to 1996's Bill Frisell Quartet (Nonesuch), and singer Petra Haden—daughter of the late bassist Charlie Haden and with whom Frisell collaborated on the sparely beautiful Petra Haden and Bill Frisell (Skip, 2004)—that gives When You Wish Upon a Star it's unique complexion, beyond the unmistakable imprint that Frisell, Morgan and Royston place on this music, playing as much from an orchestral perspective as they do a rhythmic team.

Frisell's arrangements are as respectful as they are personal. Many are relatively through-composed, like his two-part extractions from Bernstein's soundtrack to the famous 1962 drama based on Harper Lee's To Kill a Mockingbird, Hermann's score for Alfred Hitchcock's adaptation of Robert Bloch's 1959 short novel, Psycho (1960)...and a brief but wry look at the theme to Bonanza, the western-themed television show that ran from 1959 to 1973. But the instrumentation—and Frisell's ever-present allowance for his band mates to interpret his charts freely even as they're asked to follow them—are what brings them to life...and suggest how, as was the case with his Lennon tribute, this is music that will likely assume even greater freedom and collective/collaborative expansion in a live context.

Frisell's ability to create lengthy sustaining lines that shimmer beneath Kang and Haden when they're the featured voices has never been more gentle, more elegant, more flat-out beautiful. Still, the guitarist proves equally capable of sharp staccato punctuations and oblique harmonies in the two-part "Psycho" suite, where his ability to reduce music originally performed by a string orchestra down to a mere quintet—a reduction, in itself, already made by Hermann due to the film's reduced budget but one that remains so iconic that the sound of its screeching violins during the infamous shower scene remains instantly recognizable when used in any context—is downright remarkable. Kang, Frisell and Haden (again, wordlessly) assume various instrumental roles, along with a propulsive and, at times, more orchestral percussion approach by Royston, with Morgan ever-present yet never intrusive.

Frisell's arrangements may be relatively faithful—his nine-minute reduction of Rota's music from The a Godfather another example of the guitarist's ability to distill a much larger piece of music down not only for a smaller ensemble, but into a much shorter timeframe—but the entire album seems to also reflect a kind of unfettered freedom that makes it a worthwhile listen many times over. The three-part "Once Upon a Time in the West" may feel so utterly true to its roots that you can feel the dust and grime in your boots, and the heat of the sun on your brow; but equally, there's a certain sense of innocence and youth in the first of Frisell's two-part adaptations of Bernstein's To Kill a Mockingbird score, while the second part grooves in a way Bernstein's score never did...and yet feels absolutely like it could have.

On the songs that feature lyrics, Haden proves a similarly respectful interpreter who never resorts to gymnastics or pyrotechnics; instead, the slightest gesture, the subtlest of nuance make songs like "You Only Live Twice" her own...and a far cry from Nancy Sinatra's more dramatic approach to the original. Backed by a group as ethereal as it is gently grounded, Haden's approach to Frisell's rubato arrangement of the album's title track (reprised, in considerably different form, from Petra Haden and Bill Frisell) is a quiet high point of the entire set—a relatively brief but positively celestial reading that's largely carried by some of Frisell's most unique playing on the record. He's a guitarist who may seem to have gone through his greatest evolution in his younger days, but albums like When You Wish Upon a Star demonstrate that, even in his mid-sixties, he continues to build upon and evolve his utterly personal language. It may not be as dramatic as it once was, but it's there nevertheless, and particularly there to be seen and heard on When You Wish Upon a Star, despite it being an album that features little in the way of defined or delineated soloing.

And for those who opine that he's lost his edge, Frisell demonstrates it's still there when he wants it. On the only Frisell original—a reprise of "Tales from the Far Side," his soundtrack to Gary Larson's animated films of the same name also featured on Bill Frisell Quartet—the guitarist moves gradually from clean, tremelo'd Telecaster to more heavily overdriven, effects-laden lines that soar abstrusely above Haden's singing of the composition's main theme, as Morgan and Royston build along with him to a peak that's both climactic to the song...and the album.

Frisell has always been a musician for whom diversity is something to be celebrated—whether it's the original composition, horn-driven focus of This Land (Elektra/Nonesuch, 1994), altered string quartet music of Sign of Life (Savoy Jazz, 2011), collage approach of Floratone (Blue Note, 2007), near-bluegrass of Nashville (Nonesuch, 1996), roots Americana of Good Dog, Happy Man (Nonesuch, 1999) or sample-based music of Unspeakable (Nonesuch, 2004). With When You Wish Upon a Star, Frisell can add a collection of film and television music to his body of work; an album that, in its own inherent diversity and performed by a stellar group that features, for the first time, a vocalist in his lineup, ranks not only as one of the guitarist's best albums in recent years, but one of his best recordings ever.